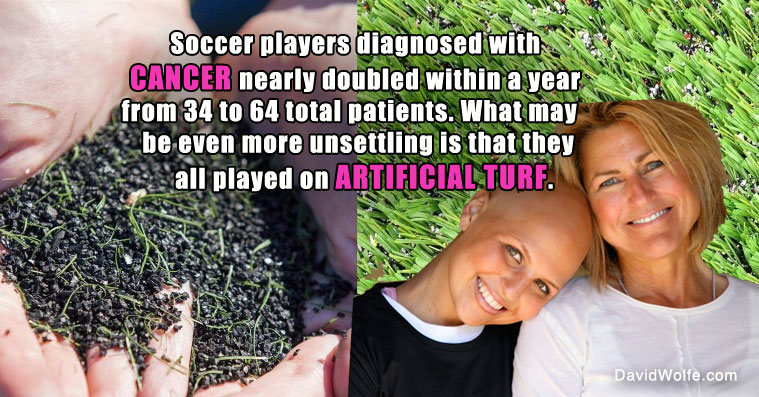 In another example of how moving away from nature often backfires on human health, a disturbing new trend suggests there may be a link between artificial turf and cancer.

“We certainly didn’t think that it was harmful because we never questioned what was in it,” said June Leahy, the mother of a soccer-player-turned-cancer-patient, Austen Everett, who died in 2012. “It was just a new surface that had a bit of cushioning.”

That “bit of cushioning” at the bottom of artificial turf is made of ground-up car/truck tires. The effect is supposed to simulate the dirt you’d find at the base of grass; the only problem is: this “crum rubber” is made up of a variety of chemicals, including known carcinogens.

Coach Amy Griffin began cataloging the names of every soccer player diagnosed with cancer that she could find, a list that nearly doubled within a year from 34 to 64 total patients. 15 of those have since died, and what may be even more unsettling is that they all played on artificial turf.

“I got a bazillion emails,” said Amy, “lots of phone calls, mostly from people that had said, ‘I’ve always wondered about this.'”

Unfortunately, all of her evidence is still anecdotal, and there is currently no study confirming a link between astroturf and cancer.

After NBC aired an investigative piece last year into the potential dangers of artificial turf. The Consumer Product Safety Commission apparently altered its initial approval of the “crumb rubber”. Instead suggesting, “‘Safe to play on’ means something to parents that I do not think we intended to convey and I do not believe that we should’ve conveyed.”

However, Dr. Laura Green, an MIT-educated toxicologist, specifies that the process used to manufacture automobile tires is specially designed to prevent chemicals and carcinogens from being released.

“There’re zero reasons to be concerned that playing on synthetic turf will put your child at risk for cancer,” she said. “It is simply not true.”

Understandably, concerned parents are urging federal regulators like the Environmental Protection Agency to do something about the problem, even if it is just to commission a study.

In spite of this, the EPA has not stepped forward to at least investigate, prompting outrage from parents like June Leahy, who lost her daughter to cancer in 2012.

“How can they possibly not do anything about it? It is mind-boggling.”

Goalkeepers would be most susceptible because they are often diving to the ground. Most of those diagnosed with cancer are goalkeepers. 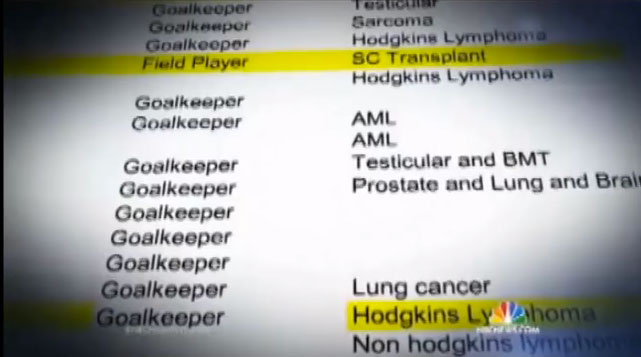