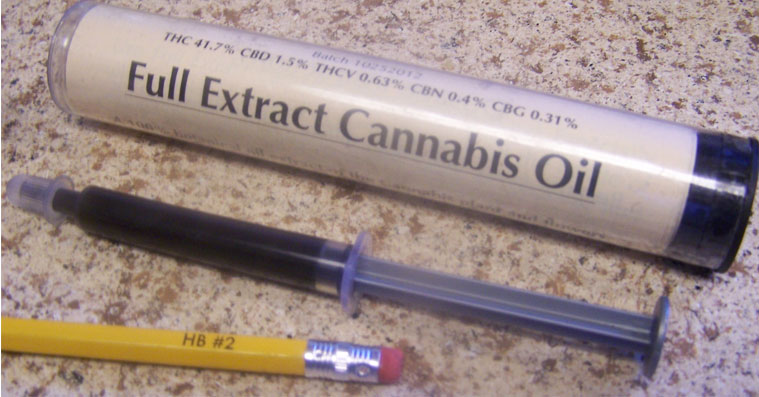 There is a cannabis oil recipe that is being used as treatment for many different forms of cancer. This recipe comes from Rick Simpson himself.

Rick Simpson has been providing people with information about the medicinal properties of marijuana for nearly a decade. He is a medical marijuana activist and cured his metastatic skin cancer back in 2003.

However, the Canadian government, pharmaceutical companies, government health agencies, and UN offices have been in apparent opposition to his work. Despite this, he has successfully helped over 5,000 patients defeat many different types of disease conditions, and he has done this free of charge.

Warning! This information is a world public service. David Wolfe, the David Wolfe staff, the hosts of this website and anybody involved in publishing this information advises you never to try this at home or anywhere else due to flammability and potential illegality. Remember, medical marijuana is still illegal in most countries in the world and many states of the United States. No cure of any type is implied or suggested by the parties providing this information.

There is a possibility to treat all of these conditions and plenty more with the use of hemp oil. Here is a video about how to make it.

0. What is a solvent? Rick Simpson recommends in the video: pure aliphatic naphtha (CAS number 64742-49-0 and a boiling point around 60-80°C) as the solvent. If you cannot get pure light naphtha, 99% or even better 99.9% isopropyl alcohol would be his second choice for a solvent. Organic folks (who do not like these chemical solutions) should use organic ethanol or grain alcohol (190 proof or 95% pure) as the solvent. Organic ethanol needs a longer time to mix with the plant material such as a month or cycle of the moon in the ethanol with daily stirring before making the oil. All of these are VERY flammable and extreme caution is advised on ANY of these steps. Protective eyewear is required. These steps must only be done by chemistry professionals in a protective lab or outdoor lab environment where medical marijuana is legal.

1. Place the starting material in a bucket of enough depth to prevent the solvent oil mix from splashing out during the washing process. Then, dampen the bud with the solvent being used and then crush the bud material using a length of wood such as a piece of 2×2.

After the bud has been crushed, add more solvent until the bud material is completely immersed in the solution. Work the bud material for three to four minutes with the length of wood you used to crush it. This time could be longer and at least a month (not minutes) is recommended when using organic ethanol as the solvent.

2. Then slowly pour the solvent-oil mix off into another clean container, leaving the starting material in the original container so that it can be washed for the second time. To perform the second wash, add fresh solvent to the starting bud material again, until it is once more immersed in the solvent, and then work it for another three to four minutes, with the piece of wood you have been using. If using organic ethanol, the second washing would take another month and could be used for another batch later.

3. Use something such as clean water containers, with a small opening at the top and insert funnels into the openings, then put large coffee filters in the funnels. Pour the solvent-oil mix from the first and second washes, into the coffee filters and allow the solvent-oil mix to drain into the containers, which are holding the funnels and filters to remove any unwanted plant material, etc.

5. It is best to burn off the solvent with a rice cooker because it boils at the perfect temperature to remove solvent and water, and keeps the cannabinoids intact. If a rice cooker is working properly, it will automatically come off the high heat setting at roughly 210 to 230°F or (100 to110°C), which is above the temperature where most people say decarboxylation is said to occur.

8. As the last of the solvent is being boiled off, you will hear a crackling sound from the oil that is left in the cooker, and you will see quite a bit of bubbling taking place in the oil that remains. Also, you will notice what looks like a small amount of smoke coming from the oil in the rice cooker, but don’t be concerned, since this is mostly just steam produced from the few drops of water that you added.

10. Take the oil that you poured into the stainless steel measuring cup and put it on a gentle heating device such as a coffee warmer or electric heating plate to evaporate off whatever water remains in the oil. Quite often, it only takes a short time to evaporate the remaining water off, but also some strains produce more natural terpenes and flavonoids than others. These terpenes and flavonoids can cause the oil you now have on the coffee warmer to bubble for quite some time and it may take a while for such oils to cease this activity.

All directions were taken directly from Rick Simpson’s website, Phoenix Tears. You can find more detailed information there.

It usually takes the average person about 90 days to ingest the full 60 gram or 60 ml oil treatment. It is suggested that people start with three doses per day, about the size of a half a grain of short grained dry rice. The patient could take this dosage every 8 hours, early in the morning, then again in the afternoon and then they should take their final dose of the day, about an hour before bedtime. It should also be noted that as a patient begins to ingest this oil, the patient does not typically feel the oils effects until about an hour after they have taken their dosage, so please be aware of this fact and avoid operating all machinery. A beginner’s dose such as what is being described would equal about ¼ of a drop.

If you have some time, check out his documentary “Run from the Cure” that was updated in 2014.