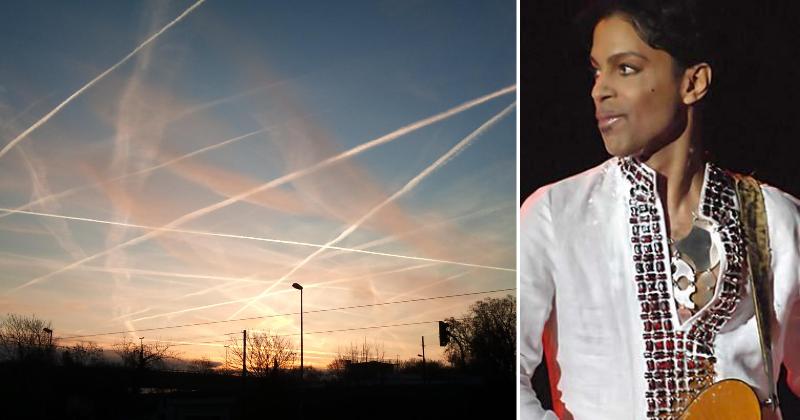 As most of you well know, we lost Prince April 21, 2016. He was a talented musician, revolutionary, and an activist. He often spoke out about problems that threatened the security and safety of our communities. One such issue he spoke about were “chemtrails,” or geoengineering, and the role they play in the New World Order.

What are chemicals doing to our communities?

According to the Oxford Geoengineering Programme, “Geoengineering is the deliberate large-scale intervention in the Earth’s natural systems to counteract climate change.”

Essentially, scientists put chemicals in the sky (chemtrails) to help control the weather. However, some people believe that these chemicals also negatively affect the psychological, mental, and physical health of humans and other life on our planet.

Chemtrails are real. (Click here to see a document that discusses how chemtrails have been used in the U.S. for weather modification.) Some chemicals found in chemtrails include barium, nano-aluminum-coated fiberglass (CHAFF), radioactive thorium, cadmium, chromium, nickel, yellow fungal mycotoxins, and ethylene dibromide.

Dick Gregory, civil rights activist, social critic, writer, and entrepreneur, has a lot to say about these chemicals. In response, Prince thought about chemicals and chemtrails on the environment. He said during an interview with Tavis Smiley:

“You know, when I was a kid, I used to see these trails in the sky all the time. So that’s cool, a jet just went over. And then you started to see a whole bunch of them, and next thing you know everybody in your neighborhood was fighting and arguing and you didn’t know why, okay, and you really didn’t know why, I mean, everybody was fighting.”

These words really made Prince think about how the New World Order seeks to control the world, and the people in it, with the use of chemicals or any other means available.

Prince spent a great deal of his life fighting record companies for freedom of creativity and the rights to his creations. It makes sense that he would also speak out about public safety and health.

Check out the words of Prince in the video below! Also included: Dick Gregory’s anti-chemical speech.

Other celebrity activists have spoken out about chemtrails. Check out this article on Vin Diesel’s Facebook post.

And if you miss his amazing talent, check out this post on his 2003 performance on the Ellen DeGeneres Show.