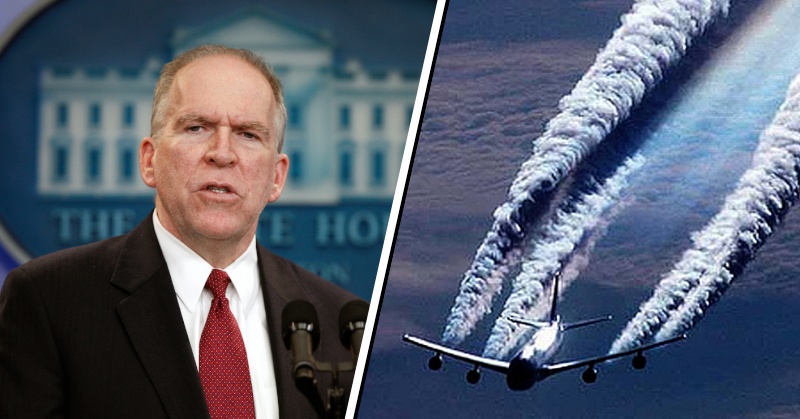 Geoengineering? How does that work?

Yes, chemtrails have long been regarded as “just another wacky conspiracy theory,” but what’s your position when a former CIA Director himself admits that the government is spraying our skies? (scroll down for video)

John O. Brennan directed the Central Intelligence Agency from March 2013 to January 2017, and he has, in fact, spoken publicly about the threat of climate change. But what’s he advocating to stop it?

But of course, Brennan doesn’t use that term. No, that would send the public into a panic.

Instead, he and many other “experts” prefer using the term geoengineering. And it does sound much fancier that way, doesn’t it?

In 2016, during a public speech given to the Council on Foreign Relations (CFR), Brennan explains:

“Another example is the array of technologies often referred to collectively as ‘geoengineering’, that potentially could help reverse the warming effects of global climate change.

“One that has gained my personal attention is ‘stratospheric aerosol injection’, or SAI, a method of seeding the stratosphere with particles that can help reflect the sun’s heat, in much the same way that volcanic eruptions do.”

Indeed, whereas the notion of secretive government programs spraying chemicals into the sky is often deemed a conspiracy, the government seems to be openly engaging in essentially the same practice now.

Furthermore, back in 2017, NASA conducted an operation to launch a “sounding rocket” that releases barium, cupric-oxide, and strontium—enough so that they were visible in the early morning sky along America’s east coast. See story here.

The wait is over! The Terrier-Improved Malemute launched this morning, June 29, at 4:25 a.m. An early Independence Day fireworks display!! pic.twitter.com/Y5x6Oz2hu8

Also, going as far back as 1990 – nearly 30 years ago – the Hughes Aircraft Company had a patent on file related to spraying the sky with aluminum oxide, thorium oxide, and refractory Welsbach material in order to combat global warming.

More recently, we can point to the SPICE program, funded by the UK government, that may end up spraying the following into the skies:

So geoengineering is just another way to say “chemtrail.” And perhaps it’s a way for the government to maintain plausible deniability in the face of growing skepticism about those uncanny stripes in the sky. But do you at least see that chemtrails are becoming reality?