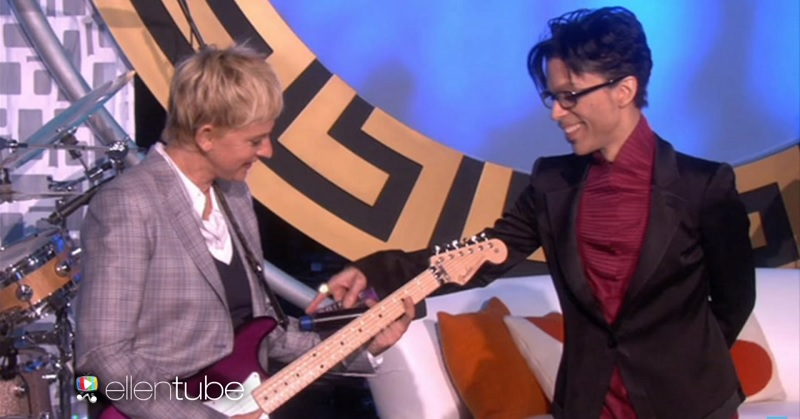 This 2003 Throwback Prince Performance On Ellen is a MUST-See!

Yes, the 2003 Prince performance on the Ellen DeGeneres Show will bring back some memories. And if you never had the chance to see Prince perform live and in person, then this performance may be the next best thing.

Shortly after Prince died, a stranger I was sitting beside turned to me and said, “Are you a Prince fan?”

We then went on to have a good half-hour conversation about the man and just how talented he was. He lived and breathed music; the sheer volume of his discography and unreleased material speaks to that.

What was also interesting about Prince was that he was very philanthropic… but you never heard about it. He didn’t flash his kindheartedness like a lot of celebrities, but still donated massive amounts of money to causes he believed in.

And then there was his personality. To say he was a charming guy would be an understatement. He had style, moves, and a great sense of humor.

That sense of humor can be seen in his 2003 appearance on the Ellen DeGeneres Show. The appearance took place during Ellen’s series debut in 2003, and Ellen describes it as being a massive source of inspiration for her and the crew, who were just getting started with the show.

The two share a fun little dance before Ellen tells him how big of a fan she is. And then she reaches behind her chair and pulls out a copy of Prince’s first official album, For You.

He laughs when he sees it, and then remarks, “See, that’s why I’m here, she’s from the old school. She knows what’s up.”

His performance later on in the show was, as you would expect, magnificent. Check it out below.

In addition to being a uniquely talented musician, Prince was an activist, who spoke through his music for human rights in all its facets.