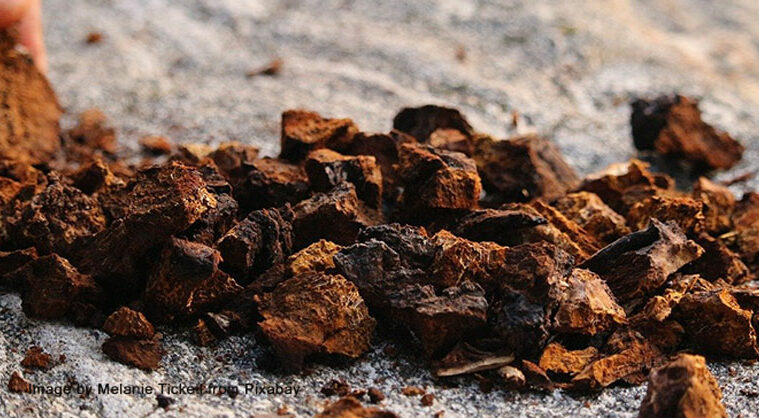 Medicinal Mushrooms Benefits: What Does The Science Have To Say?

When we hear the word “mushroom,” we often think of the kind you cook with or use recreationally. But there’s another type – medicinal mushrooms – that are criminally underrated when you consider the amazing list of benefits they provide.

Part of what makes these mushrooms so great is their versatility. For example, you can find a chaga mushroom tincture or buy the mushrooms in whole or powdered form.

In this article, we’re going to look at five medicinal mushrooms and their proven health benefits.

Many people, including David Wolfe, call chaga mushroom “The King of Mushrooms” – and there’s a good reason for that!

Chaga mushroom grows on birch trees in the northern hemisphere. To the untrained eye, chaga might look like a clump of dirt. Experts can spot it by looking for its orange tissue. (1)

Chaga mushroom contains an incredible amount of nutrients. That includes (2, 3):

Research shows that chaga mushrooms help your body promote cytokines, which are proteins than regulate inflammation, bacteria and viruses. (4, 5)

Interestingly, there is also a host of studies that suggest chaga mushroom may slow cancer growth.

Further, one study in mice found that chaga supplements caused tumors to shrink by 60%. (6)

Researchers believe that chaga’s potential anti-cancer capabilities are due to its antioxidant-richness. These antioxidants may also play a role in chaga’s ability to reduce your body’s “bad” LDL cholesterol levels. (11)

While many people call chaga “King of Mushrooms,” reishi mushroom has earned the nickname “Queen of Mushrooms.”

Reishi mushroom has been a staple of Chinese medicine for thousands of years – and for good reason.

It’s an adaptogenic herb, meaning it helps your body ward off negative side effects of stress. Like chaga mushroom, reishi contains powerful antioxidants that combat stress and may strengthen your defences against cancer.

But perhaps one of reishi mushroom’s best-known functions is its ability to boost the immune system. (12)

Research shows that one of the mechanisms reishi uses to achieve this is alteration of your white blood cells’ inflammation pathways. (13)

The study in question looked at 48 breast cancer providers and determined that reishi mushroom increased their quality of life and decreased their depression and anxiety symptoms after four weeks of taking reishi powder. (14)

Reishi mushroom can also increase natural killer cell activity, which in turn fights off infections and may help fight cancer. (15)

It’s worth pointing out, however, that while research suggests many of these mushrooms contain anti-cancer properties, that doesn’t mean they’re approved as a cancer treatment, nor are they guaranteed to prevent cancer.

Lion’s mane mushroom is a shaggy-looking fungi with a history of medicinal use in Asian cultures. (16)

The extract appears to work by reducing the impact of amyloid-beta plaques, which build up in the brain during Alzheimer’s.

Further, research shows that lion’s mane mushroom powder can improve mental functioning. The study in question looked at older adults with mild cognitive issues and found that the powder significantly improved their mental ability. These benefits disappeared when the test subjects stopped using the powder. (21)

How does it do this? The mechanisms aren’t totally clear, but research suggests it may have to do with how lion’s mane extract improves functioning and regenerates cells in the hippocampus. (23)

As with many of the other mushrooms on this list, traditional Chinese medicine has incorporated cordyceps mushrooms for centuries. (24)

Cordyceps mushrooms may increase exercise performance thanks to their ability to boost adenosine triphosphate (ATP) production in the body. This molecule delivers energy to your muscles and can help your body make better use of oxygen during exercise. (25) In one study, researchers gave 20 healthy adults either one gram of cordyceps or a placebo. The participants who received the cordyceps saw significant improvements in markers for fitness performance. (26)

Cordyceps mushroom may also provide anti-aging benefits and reduce fatigue. Research suggests this may be due to cordyceps’ antioxidant capabilities, which fight free radical damage. Current theories of aging and body breakdown suggest that free radical damage is the root of several types of degenerative damage. (27, 28)

One look at turkey tail mushroom and you’ll know where it gets its name from. Don’t worry, it has nothing to do with actual turkeys, though; this mushroom – like all the others on this list – is vegan-friendly!

These antioxidants fall under the “phenolic” category. Phenols reduce inflammation and help your body release protective nutrients. Further, turkey tail mushroom may improve gut health thanks to the prebiotics it contains. (30)

To harness these and other mushroom benefits, check out our mushroom protein powder and mushroom tinctures!

On that note, please be sure to consult with a medical professional before you take medicinal mushrooms. These products are not intended to diagnose or treat any disease as they are not FDA-regulated.