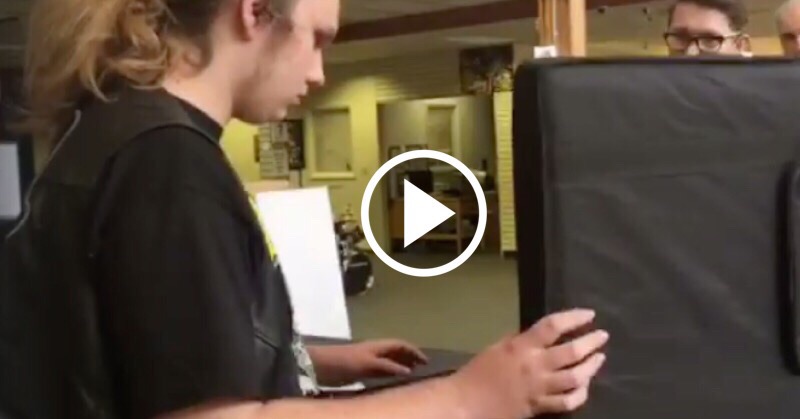 Watch: 16-Year-Old Boy Is Stunned By Gift From Deceased Father

Johnathon Crow’s father passed away before his son turned 16. But, in a truly remarkable way, he still managed to surprise Johnathon on the momentous occasion.

Johnathon, the young Michigan resident, is a huge heavy metal fan. Ever since he started taking guitar lessons, he had been eyeing a black Dean Razorback.

On Wednesday, Johnathan’s 16th birthday, his sister Chandler carried out their father’s surprise.

She blindfolded her brother and the two went to their local music shop. There Johnathon found the guitar he had wanted.

In order to ensure it would arrive in time for his son’s birthday, his father had ordered it months in advance.
“It was a really emotional moment for everybody,” store owner Pete Kruse said. “Not a dry eye in the house.”

“I was definitely overjoyed that my father gave me one last thing to remember him by,” Johnathan said. “I know a lot of kids don’t get that.”

John Crow died at the age of 49 after a heart attack in April. His son was present during the attack, and he witnessed the doctors’ unsuccessful attempts to revive him.

Crow ordered the guitar in late January. And when he died approximately two months later, the guitar lay in the store.

“We tucked it away for him so nobody would play it,” Kruse said.

Johnathon’s sister shared the video of the birthday surprise on the internet and it soon earned more than 1 million views.

It even grabbed the attention of Alice Cooper, of whom the teen is a huge fan.The band went about making sure the family has backstage passes for a concert in September.

Furthermore, people from around the world sent in money to pay for Johnathon’s future guitar lessons. Within two days, the donations accumulated to more than $17,000.

“We don’t need to give Johnny lessons for the next 16 years,” Kruse remarked with a laugh.

As for Chandler and Johnathon, they have even bigger plans. They are hoping Ellen Degeneres will see the viral clip and invite them on her show.