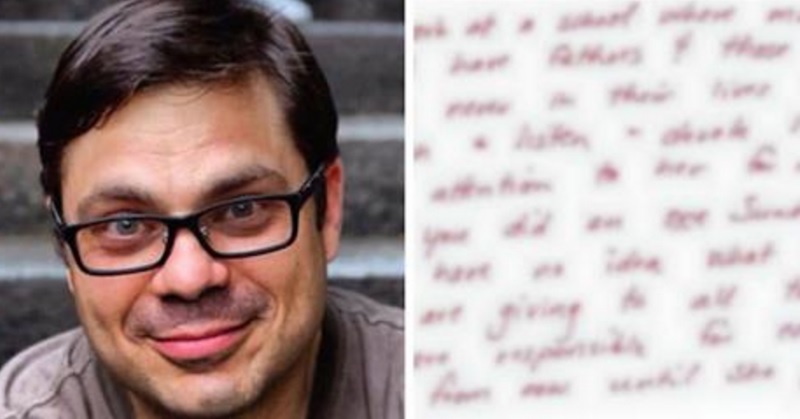 Dad Takes Daughter to Breakfast, Then Finds THIS Mysterious Note on the Table!

David Rosenman from Rochester, Minnesota is a busy guy.

In addition to being a physician and assistant professor, David is the dad of two young children.

When David took his 9-year-old daughter out to breakfast at a coffee shop one morning, he assumed they would eat in relative silence. He planned to catch up on work emails and prepare for the day ahead while his daughter worked on a knitting project.

But that morning, David’s daughter looked up at him and made a daring request – that they spend time together, without any distractions.

Touched by his daughter’s request, David granted her wish. What happened next touched David so deeply that he wrote about it on Facebook later that day.

It’s gone viral – and once you read the details, you’ll know why. 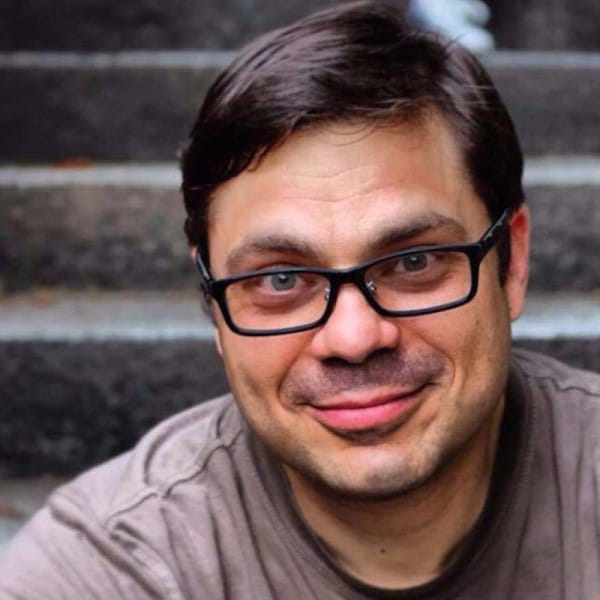 This was going to be an outing not unlike others we’d had before: While sitting at the same table, we’d do our own things – she’d keep herself occupied with something and I’d catch up on emails, organize my week, get work done, etc. Sound familiar?

Today, she made one additional request: “Daddy, can you not read the paper or doodle or check email today? Can we just be together?”

Now, a lot of dads might respond with declarations of how busy they are.

But David didn’t do that. Instead, he granted his daughter her request.

She showed me her yarn project. I recalled the day she was born. We compared notes about whether or not couples at other tables were on “dates.” She told me about her friends and their hamsters. I watched her chew her breakfast sandwich and melted a little bit as I thought about how much I love her.

Awesome, right? Wait till you hear what happened next.

After David and his daughter had their quality time together, he got up and went to the counter to order a snack for his other child.

When he got back, he saw something puzzling – a note, left facedown, in front of his seat.

David’s daughter told him that a woman had stopped by and placed the message there. When he flipped it over, this is what he saw. 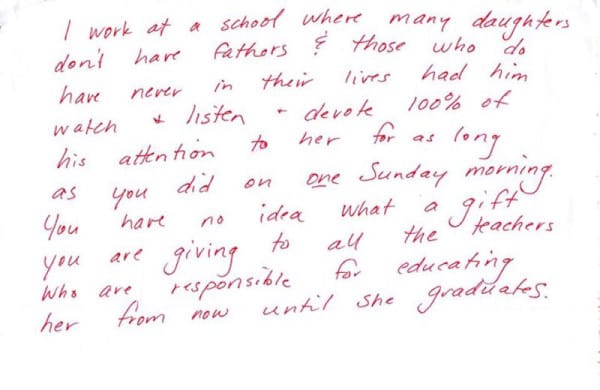 This anonymous message was enough of a reinforcement for me, that I hope more people might be guided by its power and by its author’s thoughtfulness.

Please don’t wait for your child or other loved one to plead for your attention like mine did — he or she might not. Expect that no one will leave a note for you — such beauty in this world is far too rare. I invite you to share the gift of this experience with me: Choose to be present today — even for just a little while — for someone you love. If you see it happen somewhere, consider leaving a note — It sure does leave an impression.

Happy Father’s Day to all dads!

Pass the love along by sharing this post with the positive father figures you know.

Check out this video from David’s Facebook page for more examples of fathers caring for their daughters.