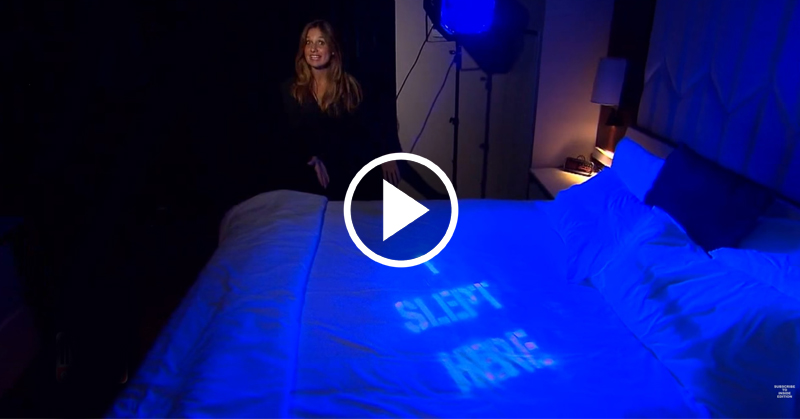 As of late, hotel cleanliness if a growing concern. There seems to be a variety of companies, establishments and researchers on the rise putting the topic to the test. The latest, administered by Inside Edition, reveals just how clean hotel sheets might—or might not—be.

It’s no secret that what looks clean might not actually be clean, and hotel sheets are a prime example.

What Inside Edition found just might make you want to reconsider your next hotel stay, or, as they suggested in their video, bring your own sheets from home!

The Inside Edition team conducted their experiment with the following process: first, they booked a room. Then, using a washable black light spray from a can and a giant stencil, they sprayed words on the sheets. They proceeded to check out of the hotel, then the next day, they checked back in to the same room.

As for their findings? For each hotel they tested, the results were consistent. Not one of the sheets at each of the hotels had been changed overnight. And when the team spoke to the hotels managers, each one adamantly stated such practices were not condoned at their respective establishments.

One manager in particular seemed greatly bothered by the questions the team asked of her. One stated that they would take action to ensure this type of practice wouldn’t occur again. While that may sound promising, retraining cleaning staff or replacing them can’t ensure the issue will not arise again.

This is because hotel cleaning staff members often cut corners in order to comply with the strict schedules imposed on them by management.  Regardless, it’s unsettling to think of all the potential contamination from sleeping on an unchanged hotel sheet.

Watch Inside Edition’s video below as they demonstrate the uncleanliness of hotel sheets: