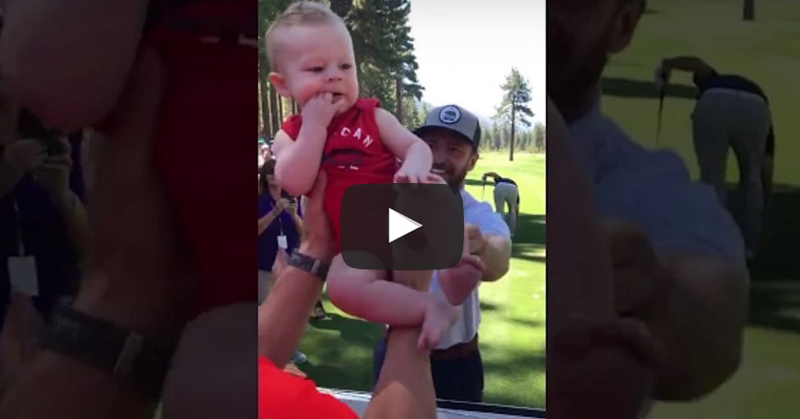 Move over, Rafiki. Justin Timberlake just might be the prime candidate to take your spot! In a viral video, a dad, at the urging of the crowd around him, asks Timberlake to hold his infant son, Logan.

And what Timberlake did next is surely a testament to his signature good-humored nature.

Fans spotted the pop star at the American Century Golf Championship Tournament in South Lake Tahoe. Shortly after, a woman jokingly remarks to Michael Hood, father of Logan, “You should see if Justin will hold your baby for you!”

At first, Timberlake was resistant—he is there to golf, after all! But as the crowd began to chant, “hold the baby, hold the baby!” Timberlake agrees and takes the lad into his arms.

And from there, things took a delightfully humorous turn.

Justin, with a small smirk on his face, lifted the baby to the air, not unlike the iconic scene from The Lion King.

“We all started singing ‘The Circle of Life’ like The Lion King and it was freaking awesome,” Hood said.

Hood and his family had traveled to the event from Roseville, California. He and his wife were stationed by the eight hole when other spectators started to fawn over baby Logan.

While Timberlake reportedly ignored Hood’s request for a handshake (or perhaps he simply didn’t hear him?), Hood admitted he was in awe of the celebrity.

“I don’t get starstruck a whole lot, but Justin Timberlake is this generation’s Elvis, so to speak,” he said. “We thought this would be awesome for [Logan] to look back on and say, ‘Wow, I got to be held by Justin Timberlake.’”

Check out the endearing moment when Justin Timberlake holds a stranger’s baby and gives him the royal treatment!