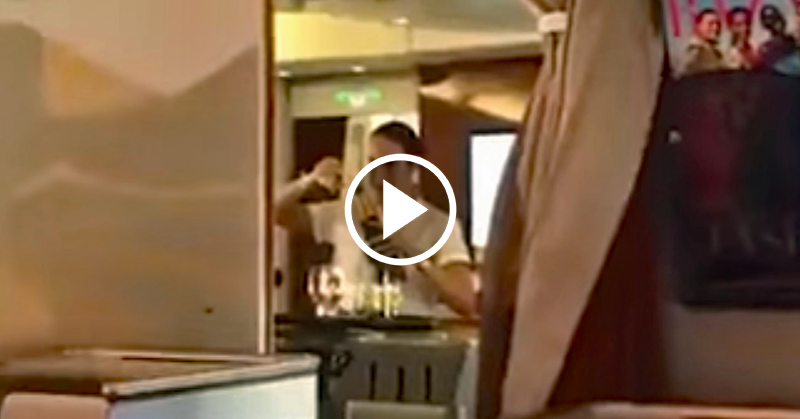 A viral video of a flight attending pouring unused champagne back into the bottle has sparked an internet debate.
While in route to Dubai, Russian passenger Yevgeny Kayumov, flying business class, filmed the occurrence on the upper deck of an A380.

“I accidentally filmed this video, and didn’t even notice this moment at the time,” Kayumov wrote.

He asked the airline if it was “normal practice” for a flight attendant to pour champagne back into the bottle.

“Emirates always strives to provide the top quality service,” an Emirates spokesperson said. “Actions recorded on this video do not comply with our quality standards. We are currently investigating the incident.”

Aside from company policy, however, in pouring the champagne back into the bottle, many questioned, what were the flight attendant’s intentions?

The share produced a wide variety of comments.  Some insinuated the employee was likely keeping some of the champagne for herself.  Others pointed out such a catch could cost the flight attendant her job.

“She should be commended for not being careless,” one person wrote.

Others saw nothing wrong with the practice, claiming she had a good reason for doing what she did.

“Hey – I’m a flight attendant – what I think is going on here is that the attendant is probably pouring the unused champagne back in the bottle before take off to then dispose of once the plane takes off,” said one commenter.

“We’re not allowed to pour things out while we’re on the ground. I bet they’re pouring it all back in the bottle so they can then pour it out at cruising instead of dumping it all in the trash can making it all soggy before takeoff…”

Another agreed with such a notion, saying, “I can corroborate this with my own anecdote. I asked a flight attendant on my last flight what they do if nobody takes the Champagne from them before takeoff, and he said they usually pour it into an empty container (I’m assuming bottle or something) and seal it for the flight.”

And disputing accusations of theft, another person wrote, “As an airline employee… there is no way they are taking it for themselves or saving it for later (against health codes, employee rules…).”

“She is almost certainly pouring the leftovers back into one container and then will go to the lavatory and pour it all down the sink at once,” said another.

Either way, it appears the flight attendant employer did not condone such a practice.

Watch the controversial video of the flight attendant pouring champagne back into the bottle: