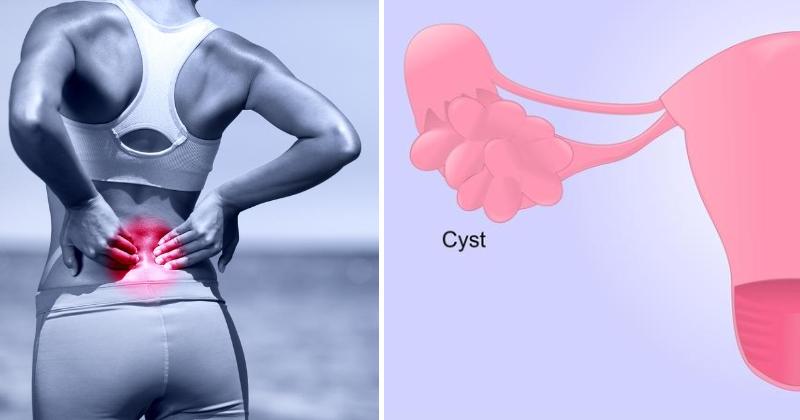 7 Early Warning Signs of Ovarian Cysts That Most Women Ignore!

Do you know the early warning signs of ovarian cysts? If you have experienced the symptoms listed below, you’re not alone. An ovarian cyst is a fluid-filled sac that develops on one of the ovaries. Many women will develop at least one cyst during their lifetime, as a result of the normal function of the menstrual cycle. In most cases, they’re painless, and the symptoms are hard to spot. There are several types of ovarian cysts, but functional cysts are the most common.

Symptoms are the body’s way of telling us that something is wrong. Many are easy to shrug off because we often attribute them to something else. For example, if you’re fatigued, you may assume you haven’t been getting enough sleep. But that’s not always the case. Or, you may assume you’re bloated because you ate too much food. But there are, of course, other reasons you may be bloated.  That skin rash appeared, you assume, because you’ve been slacking on our moisturizer. But there could be something else causing your dry skin. Similarly, there could be symptoms and signs of ovarian cysts you’ve been attributing to something else. It’s important to know the symptoms that often accompany ovarian cysts, in hopes of catching them early and ensuring that they aren’t overlooked.

Ovarian cysts that are benign go away naturally on their own without needing treatment. These are the ones that cause few, if any, symptoms. As the cysts grows, however, more symptoms are likely to appear.  For example, women whose ovaries contain a large number of small cysts may be diagnosed with polycystic ovary syndrome, or PCOS. Symptoms of PCOS include acne, irregular periods, and excessive facial hair. This condition can also cause the ovaries to enlarge, and even cause infertility if left untreated.

Early warning symptoms of an ovarian cyst include:

Severe symptoms of an ovarian cyst that require immediate medical attention include:

Routine gynecologic exams can detect ovarian cysts early. Symptoms of ovarian cancer can often mimic the symptoms of an ovarian cyst, so make an appointment with your doctor if you experience changes in your menstrual cycle, ongoing pelvic pain, loss of appetite, unexplained weight loss or abdominal fullness.

There are several herbs that are believed by some to help remove ovarian cysts naturally, such as:

This herb is thought to regulate the menstrual cycle in women with ovarian cysts. It also helps to relieve pain associated with the menstrual cycle. Some recommend taking black cohosh in conjunction with red clover for maximum benefits. These two work together to balance your hormones.

Also known as Chasteberry, this herb is used to restore hormonal balance and normalize the menstrual cycle. It promotes regular ovulation and relieves painful menstruation. Frequent ovarian cysts and PCOS can lead to problems with fertility. Vitex, however, can help remedy these issues by preventing an estrogen-dominant environment. Too much estrogen may lead to ovarian cysts, as well as a difficulty getting pregnant. If you’re having a hard time conceiving, you may look into giving vitex a try.

This herb is known for its effectiveness in balancing hormones. It promotes proper circulation to the reproductive organs which allows cysts to dissolve. It’s great for rectifying congestive fertility issues. Pregnant women, however, should avoid the use of this herb. If you take dong quai for fertility, be sure to stop taking it as soon as you become pregnant.

Known as a fertility herb, maca root balances the hormones in the body by aiding in the production of progesterone. It also nourishes the endocrine system. If you’re having a difficult time getting pregnant due to ovarian cysts or another fertility issue, you may want to consider giving maca root a try.  The taste can be hard for some to handle, but it mixes well with hot cocoa.

Certain parts of the tribulus plant can help treat ovarian cysts. This herb helps to normalize ovulation if used before the menstrual cycle. Furthermore, used as a tonic, it nourishes the entire reproductive system.

Similar to milk thistle, dandelion root can also cleanse the liver and balance hormones. It will help prevent the build-up of toxins in the body. Ovarian cysts are caused by excess hormones remaining in the liver, so dandelion root acts as a great remedy for treating them, by removing excess toxins. It is becoming much easier to find dandelion tea at your local supermarket.

This Mediterranean herb has been used to treat gastrointestinal problems, but it also nourishes the endocrine system. It acts on the adrenal glands to enable ovarian cysts to dissolve. Licorice root can also help ease hot flashes in menopausal women. Those with high blood pressure, however, should avoid use licorice root.

This herb is rich in phytoestrogens, which are plant-like substances that mimic the act of estrogen on the body. It works to balance female hormones and dissolve ovarian cysts. Even if you don’t have ovarian cysts, red clover is great for regulating the menstrual cycle. As mentioned above, you may try combining red clover with black cohosh for fantastic results.  However, if you have any kind of bleeding disorder, avoid using red clover. It can increase the chance of bleeding.

Wild Yam aids in a healthy and normal menstrual cycle while reducing ovarian pain. It is also thought to help reduce the risk of Polycystic Ovarian Syndrome. Women have used it for several years, in fact, to help correct various reproductive issues.