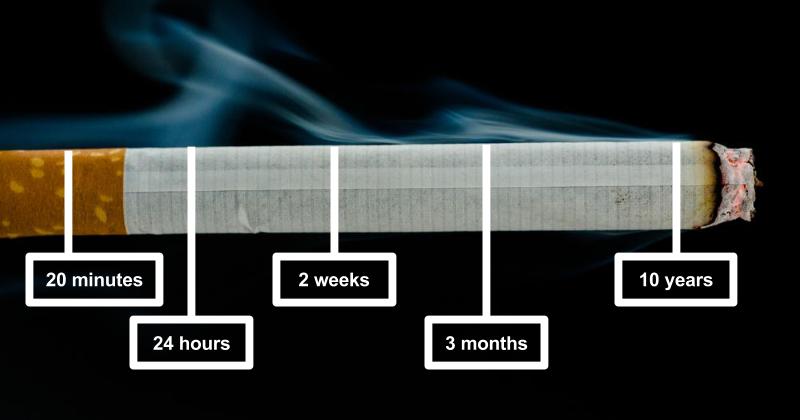 Quit Smoking and Your Body Will Benefit in These Amazing Ways!

I have several friends who have been trying to quit smoking for years. It’s tough, it really is. That’s because smoking is both a physical and psychological addiction – It gives your brain a high and becomes part of your daily routine.

Add to that the social pressure that may exist in some groups to continue smoking and it’s not hard, even for someone who’s never smoked, to see why quitting is such a challenge.

If you’re on the fence about trying to quit, I hope this post will give you that final push you need to take that first step towards being smoke-free.

20 minutes after you have your last cigarette, your body begins to undergo changes. According to the Centers for Disease Control and Prevention, your heart rate begins to drop.

That’s because, as the Texas Heart Institute confirms, smoking increases your heart rate, causing major arteries to tighten and produce an irregular heart rhythm. These all make your heart work harder, which puts you at greater risk for heart disease and peripheral vascular disease.

8 hours after you stop smoking, WhyQuit.com says the nicotine in your bloodstream drops by 93.75%. You can even help this process along by drinking plenty of water and juice, eating foods with plenty of antioxidants and exercising.

Smoking destroys your blood circulation by throwing your blood-oxygen and carbon monoxide levels out of whack.

12 hours after you have your last smoke, these levels return to normal. This comes with a wide range of benefits, from decreased chances of untimely clot formation to widening of arteries, which ensures the amount of oxygen-rich blood circulating to the rest of your body is kept in check.

That’s right. 24 hours after you quit smoking, Jack Bauer will personally arrive at your home or office (he’ll know where you are) with a homemade cake.

But what will happen is that your risk for heart attack will begin dropping. Smoking increases your chances of a heart attack by 70%, so it’s good to know that a mere day after you’ve given those cigarettes the boot, you’re already on your way back to normal levels.

48 Hours After Stomping Out That Last Cigarette

According to a 2007 Cleveland Clinic study, 48 hours after you’ve stopped smoking the deadening of senses caused by smoking begins to reverse.

As a bit of a downer, this is when you’ll begin to feel really anxious, so it’s important that you take steps to ensure it’s difficult to reach for a pack.

At this point, your body will be completely free of nicotine. This will lead to increased withdrawal symptoms but your bronchial tubes will also begin to relax. The capacity of your lungs will also increase.

According to Quit.org, your liver and kidneys are cleansing your body of all other chemicals from cigarettes by the 5-day mark. You’ve probably saved yourself a pretty decent amount of money, too – why not treat yourself to dinner?

10 days after you stop smoking, you’ll finally be at the end of the withdrawal tunnel. You should have no more than two cravings per day, each less than 3 minutes.

You’ve made it to two weeks! Nice.

One smoker puts it this way:

It seems like an eternity since I quit, but it’s only been 14 days. Still, that is a long time, and I have no intention of ever going back.

Health-wise, the blood circulation in your mouth will be similar to a non-smoker’s. You should notice irritability, insomnia and depression have subsided but if not, talk to your doctor.

Three months after you’ve stopped handing over your hard earned cash to that convenience store owner, your lung function will improve by as much as 30%.

Thanks to your lungs’ improved ability to handle mucus and reduce infections, you should notice your sinus congestion lowers. This should leave you with less fatigue and less shortness of breath.

At this point, the risk of diabetes for a female ex-smoker should be the same as that of a non-smoker.

10 years after quitting smoking, your risk of stroke should be the same as that of a non-smoker. Your risk of dying from lung cancer will also drop to half that of a smoker’s.

So How Do You Begin?

Those are some pretty amazing benefits, aren’t they? Now, I’m not saying it’ll be easy by any means. But that only makes it all the more admirable. Here at David Wolfe we’ve got a variety of posts designed to help you quit smoking. Check out this one to learn about 8 healthy foods that will detox your body.

Also, check out this video to help you quit smoking!