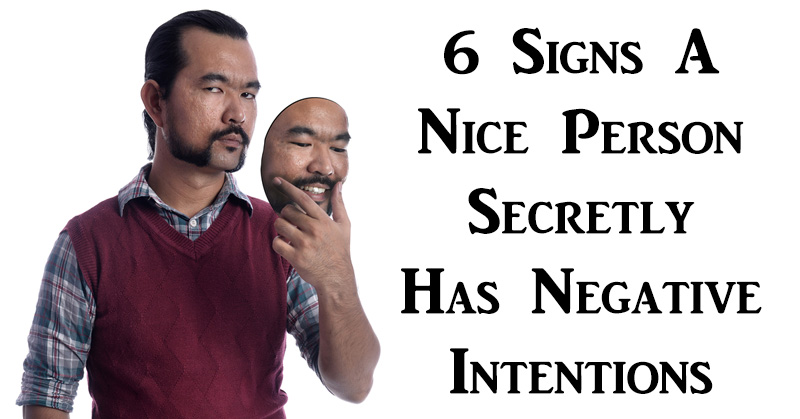 Have you ever met someone who you thought was just so nice when you first met them? They seemed funny, genuine and likable, and a friendship began to form. But as you got to know them, something started to seem off. That “nice” persona seemed to just be a mask they were hiding behind. When their real personality came out, you didn’t like what you saw.

People who seem nice when you first meet them, but turn out to be someone else are all too common. These people have hidden negative intentions and if you aren’t careful, they can end up taking advantage of you.

Here are six signs that a nice person has secret negative intentions:

Someone who seems nice but is really a manipulator tends to make demands. They believe that they are superior than those around them, so they use other people to satisfy their own agenda. Challenging their words and refusing to participate in their game can help prevent you from getting sucked into their negativity.

2. You Feel Bad After Talking To Them

Manipulators know how to use eye contact and body language to make you trust them. But if you look close enough, you might be able to see through it. Forced eye contact that is long and uncomfortable might be a sign that the person you’re talking to has a hidden agenda.

4. They Use Persuasion As A Game

5. They Use Humor To Insult You

A “nice” person who actually has negative intentions might use humor to insult you. When they say something offensive, they’ll follow it up with “just kidding.” This is a way of bringing you down and making them feel superior. They might especially use this tactic when you’re with a group of people, to make you look bad in front of others.

6. Their Conversations Are Always One-Sided

Seemingly nice people with bad intentions seek to dominate discussions. They manipulate conversations to make everything about them. This sign can take time to notice. But after being around this person long enough, you’ll begin to see that you can never get a word in, and the conversation always seem to revolve around them.