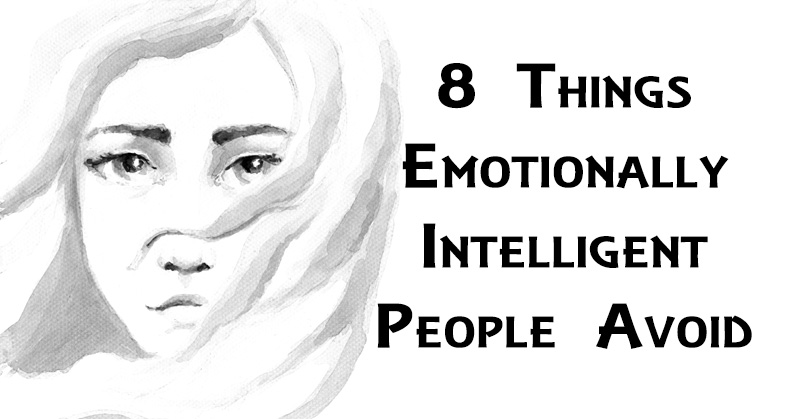 1. They Don’t Dismiss Other People’s Feelings

Highly emotionally intelligent people show empathy toward others. They try to understand how the people around them are feeling. They never disregard someone else’s emotions as unimportant. Instead, they show compassion.

2. They Don’t Play The Victim

Emotionally intelligent people know that they have the power to control how they feel. They don’t blame others when they have a bad day, and they don’t play the victim card. Instead, they redirect their negative emotions into a more productive thought, and they take full responsibility for how they feel.

An emotionally intelligent person stays in touch with their feelings, but they also know when to shift their attention outward and focus on the world around them. They are aware that constantly living inside your head can create problems. They remain in touch with their emotions but they don’t allow them to take over.

4. They Don’t Let Others Control Their Emotions

People with emotional intelligence are sensitive, but they maintain control of their feelings. They don’t let others ruin their day or bring them down. They love to keep a positive attitude and they are able to bounce back quickly from rejection and other forms of negativity.

5. They Don’t Engage In Unnecessary Conflict

Knowing when to choose your battles can be extremely valuable when it comes to your emotional health. If needed, an emotionally intelligent person will confront someone, but they avoid conflict whenever possible in order to save their energy for more positive interactions.

An emotionally intelligent person knows how harmful gossip can be. They tend to seek out more positive and uplifting conversations with others. They crave deep connections with people and they avoid those who constantly want to gossip or be petty.

7. They Aren’t Afraid To Say No

Too many people are embarrassed to say no. They end up getting overwhelmed with too many commitments and become unhappy. An emotionally intelligent person knows their limits. They honor themselves by setting boundaries and having the courage to say no when necessary.

8. They Don’t Seek Approval From Others

Emotionally intelligent people know that they don’t need the approval of others to make a decision. They trust themselves enough to be their own validation. If they want something, they go after it. They are respectful when hearing other people’s opinions, but in the end they know that as long as they work hard, they can achieve anything, and they don’t need anyone else’s approval to do it.