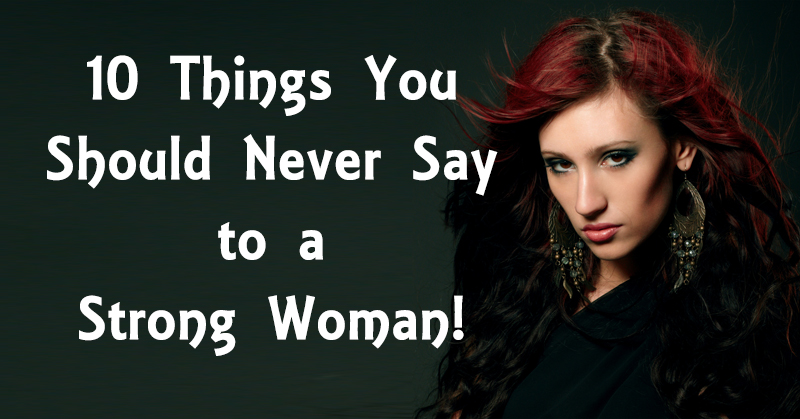 10 Things You Should Never Say to a Strong Woman!

Women are beautiful, strong, passionate, and intelligent, and they often don’t get enough credit. While remembering the golden rule can help you in most cases, there are a few tiny phrases that could really get you in trouble when you’re dealing with a strong and confident woman.

There’s nothing strong women love more than proving people wrong. If a woman wants something, she’ll go after it, despite the opinions of others. Telling her “you can’t” will only show her that you don’t believe in her.

If a woman is fired up about something, there’s a good reason. It’s not because she can’t control her emotions. It’s because she’s passionate. Telling her to “calm down” will only ignite the fire under her and show her that you don’t understand her at all.

Although want is different than need, who are you to tell a woman the difference? A woman has the right to buy something that she wants, just because she wants it. Let her enjoy things that make her happy, instead of using this phrase to bring her down.

Using this phrase is shaming a woman for who she is. You’re letting her know you aren’t happy with a part of her, whether its her appearance, her personality or her opinions. If you say this to a strong woman, don’t expect her to stick around.

5. “That’s pretty impressive for a woman.”

This one starts out as a compliment, then quickly takes a downhill turn. Contrary to old opinion, women are not a “weaker sex.” If you’re impressed by something a woman says or does, use this phrase, but stop at “impressive.”

Women serve in the military. There are women who are astronauts, pilots, mechanics, and bodybuilders. They work in every profession you can think of. When a woman lands a good job, it’s because she’s hardworking, intelligent, persistent and fully capable.

If a woman is serious about something, do not, under any circumstances, tell her to “lighten up.” A strong woman knows her morals, boundaries and beliefs, and if you test them, she’ll make you wish you didn’t.

Just because a woman is showing emotion, it doesn’t automatically mean Aunt Flo is in town. Suggesting that a woman is on her period because she has feelings is an old and tired stereotype that women won’t tolerate.

There are plenty of pros and cons to being female, but chances are, if you’re a male, you don’t recognize all of the hardships women often face. Everyone has their own struggles in life, regardless of gender, so assuming someone else has it easier says more about you than the other person.

Why is it that women often get called “bossy” for confidently doing their job or running a household? If a woman is being “bossy” around you, it’s because she’s on a mission to get things done. The word “bossy” has a negative connotation. If you use it, you’re only trying to bring someone else down.

Talk about a strong woman!