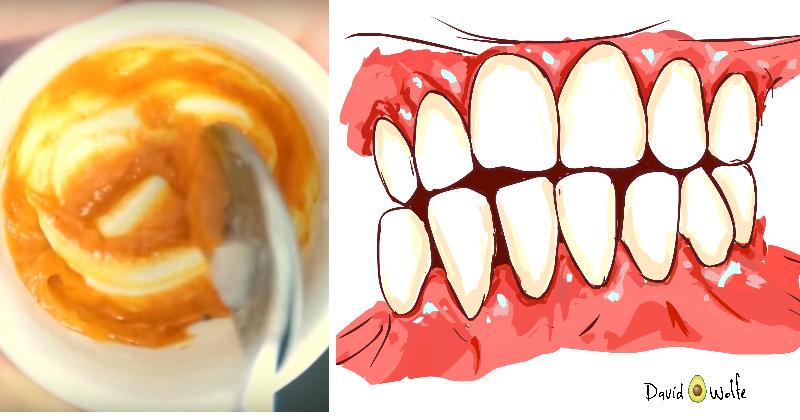 Dental hygiene is an important part of total body health. A healthy mouth works to prevent infections from entering the body. In fact, some studies have shown that plaque build-up leads to a higher chance of cardiovascular disease and poorly managed diabetes.  But it starts with gum disease. (1)

We need to take better care of our mouths. Unfortunately, commercial toothpaste is not the healthiest choice. For example, some toothpastes are full of plastic, and most contain harmful chemicals like triclosan, sodium lauryl sulfate, artificial sweeteners, fluoride, propylene glycol, and diethanolamine. (2)

Because commercial toothpastes are not getting the job done as they should be, what can we use to make sure our teeth are as healthy as possible?

This turmeric, peppermint, and coconut oil toothpaste is what we should all be using!

Turmeric is anti-inflammatory, contains antioxidants, and is antimicrobial. This makes it perfect for treating common dental problems like gum disease. (3)

Coconut oil is antibacterial, which makes it perfect for fighting bacteria that tends to grow in the mouth. It also reduces inflammation! (4)

On top of their fantastic health benefits, coconut oil and turmeric also work to keep teeth looking white and sparkly without the use of harmful tooth whitening strips or toothpastes. (5)

If I had a choice between commercial toothpaste and this amazing turmeric peppermint coconut oil toothpaste, I would pick the latter every time! It is much healthier and will do more than just clean your teeth. This natural remedy is the complete package.

Who is ready to start brushing with turmeric?