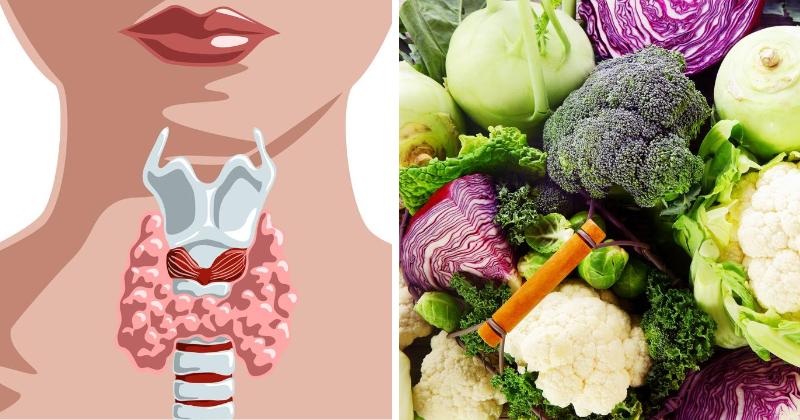 Avoid These 6 Foods if You Have a Thyroid Disorder!

The thyroid gland is located at the base of the neck, and it influences almost all of the metabolic processes in the body through the hormones it produces. Thyroid disorders can range from a somewhat enlarged gland that doesn’t need treatment, to life-threatening cancer. Women are at a higher risk of developing thyroid diseases, especially right after pregnancy and after menopause.

The most common thyroid problems involve abnormal production of thyroid hormones. Depending on how much or how little hormone your thyroid produces, it can cause fatigue, restlessness, weight loss or weight gain. Too much hormone results in a condition known as hyperthyroidism, while insufficient hormone production leads to hypothyroidism. The effects of a thyroid disorder can be unpleasant and uncomfortable, but most thyroid problems can be managed after being properly diagnosed and treated. If you are suffering with a thyroid disorder, certain foods can have a significant impact on your energy, weight and overall health.

These six foods should be avoided at all costs to prevent a thyroid disorder from becoming worse:

Hypothyroidism can cause the metabolism to slow down, so many of those who suffer from it find themselves easily packing on extra pounds. If you have hypothyroidism, you’ll want to avoid foods with excess amounts of sugar. They are loaded with calories and little to no nutrients. If you can’t eliminate sugar from your diet, reduce the amount you consume.

Fats have been found to disrupt the body’s ability to absorb thyroid hormone replacement medicines, as well as interfere with the thyroid’s ability to produce hormone. If you have a thyroid disorder, it’s best to eliminate fried and fatty foods that are heavily processed, as well as reduce your intake of fats from sources such as butter, mayonnaise and margarine.

If you’re already addicted to coffee and you have problems with your thyroid, this is probably the worst news you’ll get all day. Moderate amounts of coffee shouldn’t be much of a problem, but excessive amounts of caffeine can affect your adrenal glands, which can lead to fatigue and other thyroid problems. If you are a coffee drinker, try to cut back a bit, and don’t drink your morning cup of joe until at least an hour after you’ve taken your thyroid hormone replacement medication. Drinking coffee with your medication can make the medication less effective.

Vegetables are a staple in a healthy diet, but for someone battling a thyroid problem, digesting cruciferous vegetables such as broccoli and cabbage can interfere with the production of thyroid hormone. The vegetables can block the thyroid’s ability to absorb iodine, which is imperative for keeping the thyroid functioning properly. If you have a thyroid disorder, you don’t need to eliminate vegetables completely, but try limiting your intake of broccoli, cabbage, cauliflower, kale and turnips. If you are consuming cruciferous vegetables, cook them first to reduce the effect they can have on the thyroid gland.

Soy can inhibit the absorption of the thyroid hormone in those with hyperthyroidism. If you suffer from thyroid problems, it’s best to stay away from it. Processed forms of soy such as shakes, powders, soy milk, soy bars and supplements can make things worse. If you can’t eliminate soy completely, stick to fermented forms such as tempeh, and consume it in small quantities. Those with hypothyroidism don’t need to worry about avoiding soy.

Gluten contains a protein known as gliadin, which is foreign to the human body. The thyroid contains an enzyme that is similar to the protein, so when gluten is consumed, the immune system triggers an attack response on both the protein and the enzyme. A gluten intolerance is often hard to recognize with hypothyroidism, because the symptoms — bloating, abdominal pain, and digestive problems — tend to overlap. Gluten can be found in foods that are processed from wheat, barley, rye and other grains. If you do choose to eat gluten with a thyroid disorder, whole-grain varieties of bread, pasta and rice are recommended.

Check out the video for some natural remedies to support thyroid function: