The Science of Chocolate and Cannabis: How They Combine To Make Powerful Medicines

Chocolate and cannabis are so wonderful that even the mention of both in a sentence is enough to make one giggle. Scientific proof is mounting that both chocolate and cannabis contain healing properties. Their dance is well-known to many, who may have fond memories of gorging through a pan of pot brownies. Indeed, these two super foods are magical but as David Wolfe explains below there is plenty of science that answers ‘how’ and ‘why’ they work so well as medicine.

Cannabinoids are fat-soluble (lipophilic), often-medicinal, chemical compounds found in plants and mammals. These compounds can also be synthetically manufactured. The most well-known natural cannabinoid chemical is Delta-9-tetrahydrocannabinol (THC). THC, as we know, is the primary psychoactive compound found in the cannabis genus of plants. Currently there are approximately 85 different cannabinoids that have been isolated from cannabis including the known medicinal compound cannabidiol (CBD). Of cannabis’s cannabinoid extracts, CBD is second in concentration only to THC, ranging as high as 40%.

The search for more cannabinoids in plants took an interesting turn in 1996 when Daniele Piomelli and fellow researchers isolated a cannabinoid neurotransmitter called anandamide (n-arachidonoylethanolamine or AEA) in chocolate. The interesting thing about anandamide is that it is also a naturally endogenous (internally occurring) cannabinoid found in the human brain and nervous system that plays a role in feelings of overall well-being.

The word “anandamide” means “the bliss chemical” because it is released while we are feeling great. Anandamide is derived from the Sanskrit word “ananda” meaning bliss and “mide” meaning chemical. 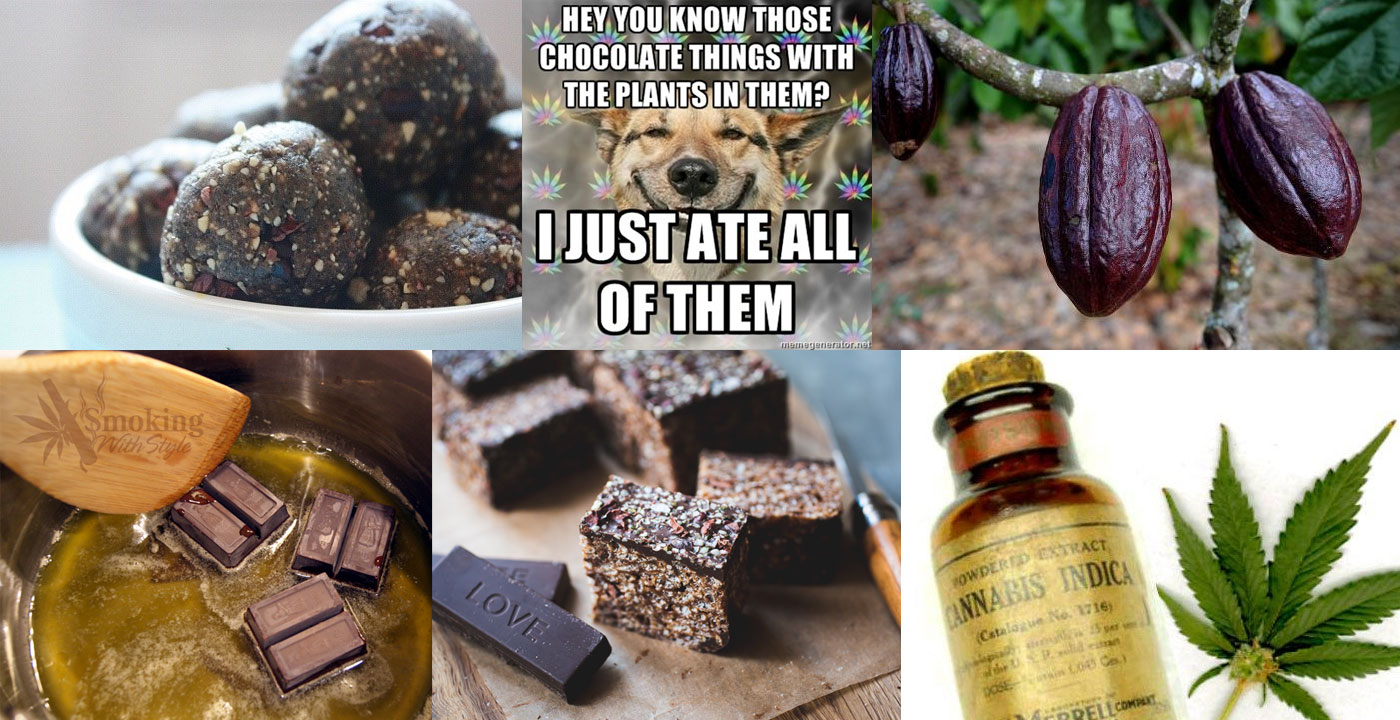 The original discovery of anandamide in the early 1990s and its discovery in chocolate arose from research into cannabinoid receptor sites. A receptor site is a structure on the surface of a cell that can lock onto certain molecules, making it possible to carry a signal through the cell wall — a “lock-and-key” system. It had long been known that the human brain contains receptor sites that interact with cannabis’ THC molecule. It was inevitable that an endogenous, naturally-occurring, chemical — namely: anandamide — would be found to explain the presence of these receptors.

Cannabinoids such as THC, CBD, and anandamide are keys that fit into (or agonize) cannabinoid receptor sites (or locks) in mammals. Agonists are chemicals that bind to particular receptors on cell membranes (in this case, cannabinoid receptors) and that subsequently trigger responses by these cells. For example, THC agonizes cannabinoid receptors throughout the human body causing not only the classic marijuana high, but also medicinal effects that could protect certain cells and/or cause mutated cells to be destroyed by the immune system. In another example, anandamide in chocolate agonizes cannabinoid receptors throughout the human body. Because anandamide is slightly chemically different from THC, it causes slightly different effects. Eating chocolate provides a mild high, weaker (though similar) to the classic marijuana high. Chocolate’s anandamide also influences cells that affect mood, memory, appetite, pain perception, and (overall) may in fact provide medicinal benefits similar to THC.

It is of interesting note that the CB2 group of cannabinoid receptors are found amongst immune cells. This discovery has now validated that cannabinoids function to modulate immunity providing overt medicinal benefits. Scientific research indicates that cannabinoids may protect: the gastrointestinal tract (reducing: inflammatory bowel disease, ulcerative colitis, Crohn’s disease); the heart; from pain; bone density; as well as even greater benefits against metabolic plaque formation (calcification) and even cancer.

As a CB2 cannabinoid receptor site agonist THC is effective not only in the treatment of pain, it is also effective against numerous inflammatory conditions, osteoporosis, and atherosclerosis in different animal studies.

Activation of CB1 by THC provides neuro-protection after a brain injury. THC is also effective against certain forms of migraine headaches.

Glaucoma is the second leading cause of blindness. THC is able to lower internal eye pressure and improve eyesight in those suffering from glaucoma.

Rick Simpson’s film “Run From The Cure” indicates that cannabis oils (including and especially THC) can cure surface skin cancers and treat other types of cancers as well. We have personally seen the positive (often miraculous) effects of cannabis oils on skin cancers in half a dozen people. Experience in the healing profession has also indicated to us that Dr. William Courtney’s testimony of using raw cannabis leaf juice to treat cancer in his patients is accurate and effective.

Some types of tumors, especially gliomas, possess CB2 cannabinoid receptors. THC and WIN-55,212-2 (a potent cannabinoid agonist similar to THC in effect, yet totally different in structure), cause the regression or eradication of malignant brain tumors in rats and mice.

In addition to these benefits, THC is psychoactive, allowing for stress-relief, activation of the imagination, increase in musical sensitivities, release from material concerns, and reconnection with the natural environment.

Mental Health: More research continues to pile up indicating that CBD is neuroprotective and acts as an anti-psychotic and anti-schizophrenic medication that also counteracts the possible delusional and hallucinatory effects of THC on those with a history schizophrenic symptoms. In a similar way, CBD may actually counteract social anxiety disorders including paranoia that may be triggered or exacerbated by THC.

Cancer: Like THC, CBD’s show efficacy against glioma cell lines (brain or spinal tumors formed of glial cells). CBD turns off DNA-binding protein inhibitor ID-1. This protein inhibitor is considered responsible for tumor metastasis, especially in breast cancer. CBD may act to cause apoptosis in cancer cells (the spontaneous self-destruction of these cells) via its action on mutant p53 proteins found in cancer cells.

Cannabis samples containing higher fractions of cannabidiol (as opposed to THC) are known to allay the short-term memory loss associated with cannabis use.

All of these benefits indicate the future will deliver more CBD-rich strains of cannabis.

Anandamide’s effects can be either levied upon the central nervous system (e.g. brain, nerves, etc.) or peripheral, in cells throughout the body (e.g. white blood cells). The latter, as we have seen, are mainly involved in functions of the immune system.

High levels of anandamide were found in young men who ran or cycled at a moderate rate for about an hour, according to a study published in the journal NeuroReport by the Georgia Institute of Technology and the University of California, Irvine. Anandamide may be responsible for the euphoric feeling some people experience when they exercise that we sometimes call “runner’s high.” Arne Dietrich, the study’s principal investigator believes the body releases cannabinoids to help cope with the prolonged stress and pain of moderate or intense exercise. Studies have linked anandamide to analgesic reactions produced by the body during exercise, especially by running.

Anandamide is also an activator of the transient receptor potential (TRP) vanilloid 1 (TRPV1) found on primary sensory neurons. The activation of the TRPV1 receptor activates a metabolic anti-inflammatory response.

Anandamide plays a role in eating habits and appetite and in the generation of both: motivation and pleasure. Experiments indicate that anandamide may be as important as the more well-known neurotransmitters: dopamine and serotonin. Anandamide may act as a component in the control of cognition and expression of emotions. Anandamide, when injected directly into the forebrain of rats, enhances their pleasurable responses to sucrose rewards, and increases their food intake as well.

The Coup De Grace: How Chocolate Increases the Power of THC and CBD

Not only does chocolate contain anandamide, it also contains, in much higher amounts than anandamide (by a factor of 103-104), the cannabinoid breakdown inhibitors: N-oleolethanolamine (OEA), a known inhibitor of weight gain in mice, and N-linoleoylethanolamine (18:3 NAE), a known anti-inflammatory molecule — like anandamide — via the TRPV1 receptor). These two structural cousins of anandamide both inhibit the metabolic breakdown of anandamide and could potentially inhibit the breakdown of other cannabinoids including THC and CBD causing these compounds to stick around longer, providing even more benefits (as if one had taken more THC or CBD).

Theobromine, the major xanthine alkaloid and caffeine-relative in chocolate, is a known vasodilator that acts as a “driver” of nutrients and chemicals into the tissues; theobromine could also be responsible for exaggerating the effects of THC, CBD, and even the anandamide found in chocolate.

Special Note on Cannabis Smoking:
Numerous arguments are levied against smoking cannabis including: the illegality of the substance in most nations, short-term memory impairment, influence on the cerebellum that could lead to loss of coordination, potential withdrawal symptoms, and that cannabis smoke contains some carcinogenic substances. However, most of these arguments fall apart when eating, blending, or juicing organic, outdoor-grown cannabis leaves and flowers (which typically delivers a higher ratio of stabilizing CBDs and lower, or even no psychoactive THC effects), when consuming them in chocolate (to amplify and modulate the delivery of cannabinoids) and/or when creating and using their extracts in oil (as, for example, medicinally described in the film “Run From The Cure”).

David Wolfe’s products may be found exclusively at these websites: