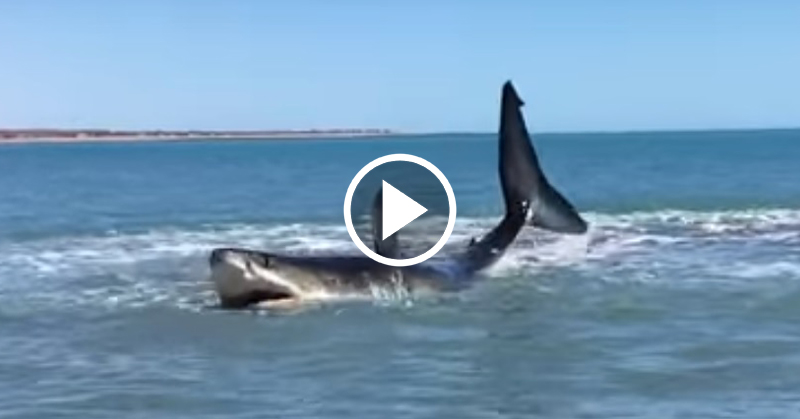 On May 27th, Dale Pearson spotted what he thought was a hammerhead shark near his home on the Sea of Cortez in Mexico. He rushed down to the scene with a friend (Eric Mack) because they believed the shark was stuck in a gill net.

It wasn’t until they were feet away that they noticed it wasn’t a hammerhead, but a great white shark.

Once they realized the shark was not caught in a net, they turned their focus to the painful looking cut in its back.

They determined it was hit by a propeller but that it appeared to be in good health. It also left shallow water many times and swam back in. They guessed it was feeding on stingrays.

The Marine Conservation Science Institute shared the video with the following comments:

We are always nervous about our Guadalupe White Sharks during the pupping season. Our big pregnant females pup both in the Sea of Cortez and the Pacific side of Baja. The Sea of Cortez is loaded with gill nets; typically the shark can break through it, but occasionally they get so entangled that they die. We agree with person who took this video, in that the injuries from the boat propeller would likely not kill the shark…they are exceptionally tough with incredible healing ability.

Take a look at the video below:

You can watch the full video below. Warning, the language is a bit rough.