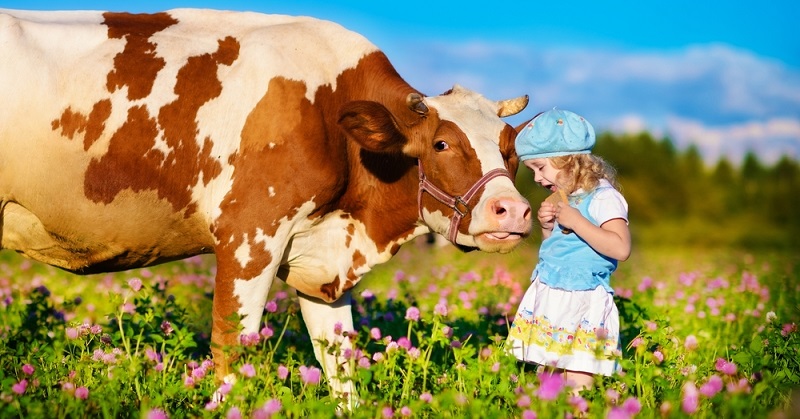 Get Your Kid a Pet and THIS Will Happen to Their Health!

More than half of the world’s population lives in cities, and study after study has shown that urban life may be taking a toll on our health and well-being. Experts have estimated that by the year 2050, as much as 70% of the population will reside in cities, and the traffic, the noise and the pollution is already adding up. More research is showing the benefits of living away from the city — more specifically, on a farm.

Farm Animals and The Immune System

Recent research has shown that exposure to farm animals in early childhood modifies immunological responses, suggesting that without exposure to nature in an urban setting, children may not be getting the immune system boost they need to fight allergies and other complications later on in life.

In her PhD thesis, Heidi Kaario, MSc, investigated whether or not farm animals or pet exposure (cats and dogs) affect the functional properties of dendritic cells and cytokine production in children. Dendritic cells are found in lymphoid or immune organs, and at the interfaces between our bodies and the environment, such as the epidermal layer of the skin. When the body senses an injury or an infection, dendritic cells travel from the body’s surface to immune or lymphoid tissues to deliver information to T-cells, which produce an appropriate immune response.

Dendritic cells are equally responsible for immune tolerance, silencing dangerous immune cells and preventing them from attacking the body’s own tissue. They control the production of cytokines in the body, which regulate the balance between tolerance and immunity. An increase of cytokines in the body is associated with inflammatory and autoimmune diseases.

Kaario found that farm children produced more non-allergic TH1-associated and regulatory cytokines than their non-farm counterparts, suggesting that by introducing children to foreign but not harmful animal cells and animal-associated bacteria, their bodies are less likely to overreact to allergens, promoting optimal immune system regulation. After being exposed, the immune system more efficiently protects against chronic inflammation, exaggerated immune response and the development of autoimmune diseases.

Today’s society is obsessed with cleanliness and doing everything we can to avoid germs. Kaario’s study suggests that by not allowing children to become associated with nature for fear of proper hygiene, their immune systems may not have appropriate exposure to natural bacteria that help to strengthen them, specifically in regard to asthma and allergies.

Another study found that 3-year-olds who were exposed to mouse dander and cat dander before they turned 1 were three times less likely to suffer from wheezing, allergies and asthma than those who lived in homes without allergens, leading researchers to believe that kids today are not exposed to enough dirt and bacteria at a young age, leaving their immune systems ready to overreact to substances that should in fact be harmless to them.

So where’s the line between exposing your children to natural bacteria found in nature, and practicing proper hygiene to keep them safe? The decision is yours to make.