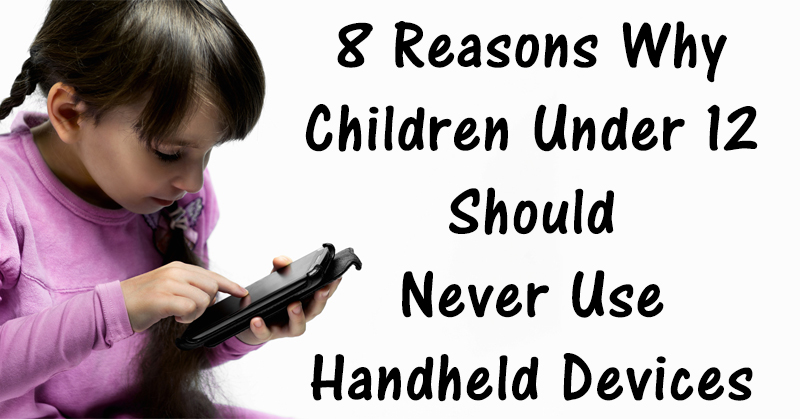 8 Reasons why Children Under 12 Should Never Use Handheld Devices

The first handheld device I received as a child was my dad’s old PalmPilot. It had a black and white, pixelated screen and ran on AA batteries. Wireless internet wasn’t really a thing back then so all it could do was take notes and display a calendar.

When I finally did get a cellphone – at the age of 14 – I was thrilled. I was one of the first among my friends able to send text messages – albeit, only 100 or so a month.

Oh, how times have changed.

If you find yourself cringing at that statistic, you’re not alone. Child experts share your disdain. Some, like therapist Cris Rowan, are calling for an outright ban on handheld devices for all children under the age of 12. Research has shown that children who spend excess time in front of a screen (i.e. ogling an iPad everywhere they go) tend to develop issues with attention, cognitive ability and self-regulation.

Of course, kids 12 years old and younger aren’t going to limit their technology use with these consequences in mind. That sort of reasoning doesn’t pop up until one’s teen years.

Kids today might be able to brag about how great their portable technology is. But, thanks in part to that technology, today’s generation may be the first in recent history to not outlive their parents.

Why? Because obesity, that’s why.

As LiveStrong.com puts it, “an increase in exposure to technology goes hand in hand with a decrease in physical activity.”

Put simply, technology has made it super easy for kids to never break a sweat. They don’t even need to wait for their favorite television show to come on anymore. With a few taps on a screen, Spongebob is ready whenever they are.

Again, before kids are teenagers they just aren’t thinking about these sorts of long-term consequences. 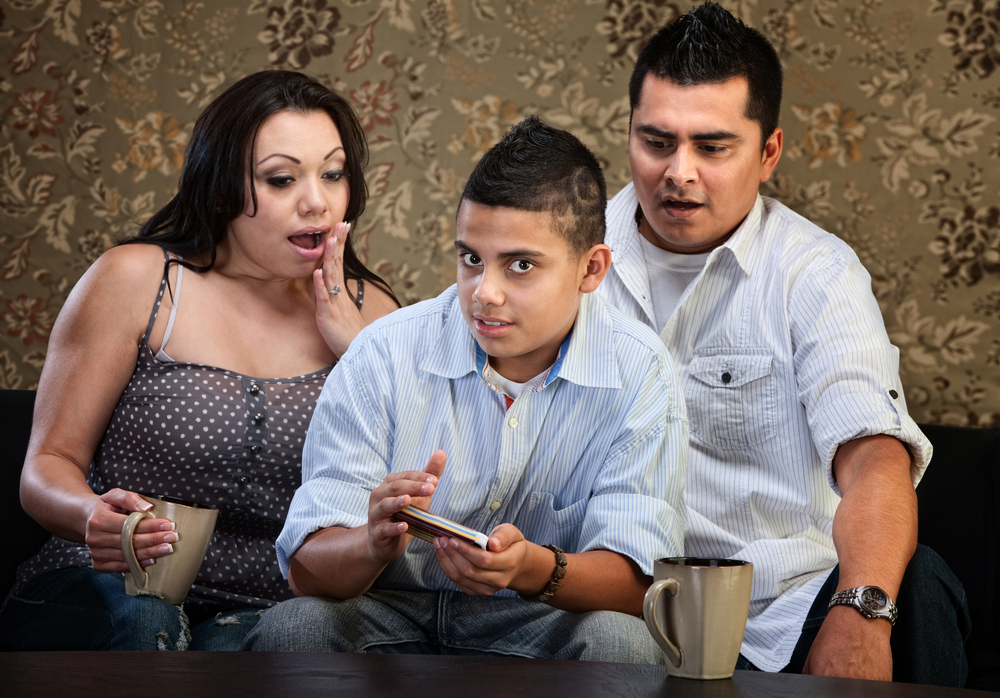 Only 37% of all parents surveyed by McAfee said they’re able to access their child’s mobile devices. As if that wasn’t terrifying enough, kids belonging to 15% of those parents said they’d actually lied to mom & dad about their password.

That means roughly 88% of parents out there have no way of knowing what their kids are doing on their mobile devices.

Parents, that can actually land you in some pretty hot legal water. The law stipulates that children over the age of 12 are mature enough to be held accountable for their actions online.

So if little 12-year-old Jimmy bullies his classmate on Facebook and anyone gets charged, it’ll be him. Now, if Jimmy happens to be 11, I hope mom and dad have a good lawyer. As per law, it’s their responsibility to keep tabs on what he’s doing.

They could try to get Jimmy to spill his iPhone password so they could keep an eye on him. Or they could just, y’know, not give him a mobile device until he’s mature enough to process the idea of long-term consequences that seems so elusive to preteens.

Tell a child their mobile device emits radiation and they’ll probably go, ‘Cool! So does that mean I’ll be like Hulk?’

Er, sorry kid. Things don’t quite work like that; you’re much more likely to wind up with cancer.

The World Health Organization currently classifies wireless devices as category 2B carcinogens, meaning they ‘possibly’ pose a risk. Recently, the American Academy of Pediatrics has actually requested that classification be upped to 2A, which represents a ‘probable’ carcinogen.

This is especially concerning since children with cellphones tend to keep them close-by at all times – even as they sleep.

Excessive screen use wreaks havoc on your eyes. This is especially true for young children who spend 8+ hours per day in front of some sort of screen. Kids’ eyes are still developing to filter out some of the blue light cellphones emit. As such, that light penetrates much deeper than it would for you and I.

Want to learn more about the effects of technology on telephones? Check out this video!