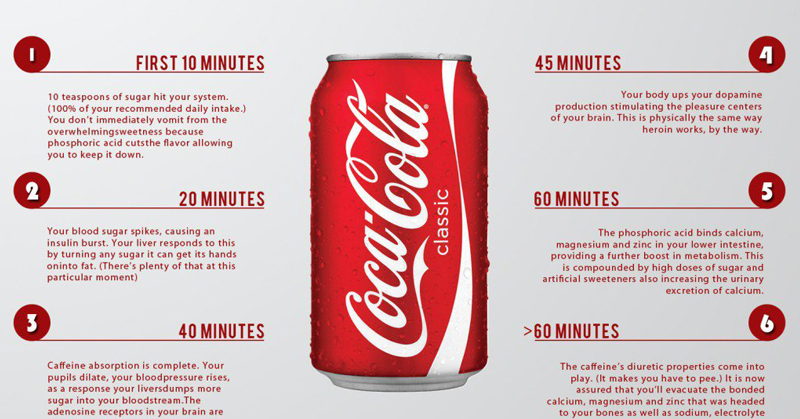 Drink 1 Can of Coke and THIS Happens to Your Body in 1 Hour!

With all the information available about just how bad Coca-Cola is for you, it’s amazing people actually still put it into their bodies.

Every single day, 1.9 Billion bottles of Coca-Cola are consumed worldwide.

Why is that so concerning? One large reason is that each bottle of Coca-Cola contains an alarming amount of high fructose corn syrup (HFCS), which is the single highest calorie source in the American diet.

We’re addicted – Even when Coca-Cola tried to replace HFCS with healthier cane sugar back in 1985, the public freaked out and the company went back to their original formula.

HFCS interacts with the brain in a way similar to cocaine and heroin. In fact, one study showed that lab rats will subject themselves to all sorts of pain by walking across an electrified plate to access high fructose corn syrup.

One behavioral therapist says this addiction in mice is very similar to that in humans.

As if causing an addiction that results in misery-inducing withdrawal symptoms isn’t bad enough, Coca-Cola consumption also begins wreaking havoc on your body the moment you ingest it.

This meme from The Renegade Pharmacist outlines just how bad the immediate effects are. I’ll go into detail below. 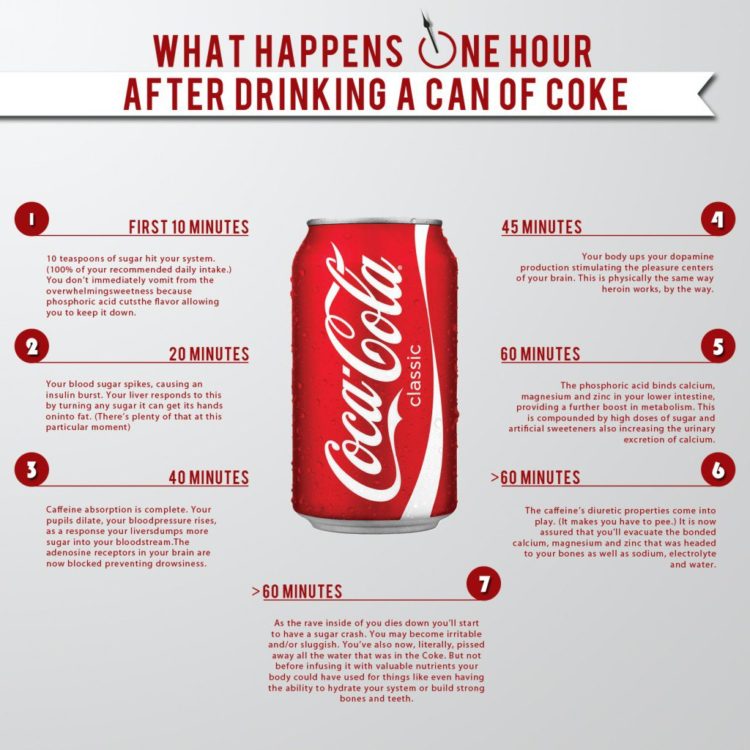 One drink contains 100% of your daily recommended sugar intake, and that’s no joke, especially when you consider how many of the other things we consume daily meet that same quota.

Eating so much sugar – particularly of the artificial variety – has disastrous effects on the body, which include an increased risk for cavities, leptin resistance (which leads to obesity), insulin resistance, diabetes, high blood pressure and heart disease.

All that sugar hitting your body instantly is why Coca-Cola begins to affect you within 10 minutes of ingestion.

Researchers have found that when such a high amount of fructose hits the liver, your body will convert most of it into fat. This is the fundamental problem behind obesity and may also have a large role in the development of various cancer types.

By this point, your body has absorbed all the caffeine in the Coca-Cola. And there’s lots of it – 32mg, to be exact. Diet Coke is worse, by the way, at 42mg. That’s already just under half of the recommended caffeine intake for adolescents.

At this point, your brain begins to react to the Coca-Cola in a way similar to heroin – by increasing your dopamine production. This makes you feel good and stimulated due to the activation of your u-opioid receptors.

At 60 minutes, the Coca-Cola begins to affect your body’s calcium level due to the exodus of calcium through your urine that occurs as a result. Researchers report that this may have a harmful effect on your bones.

Other nutrients your body gets rid of as a result of Coca-Cola include magnesium, zinc, sodium and electrolytes. The excretion of these increases in the 2 hours following ingestion.

And then comes the sugar crash, where you’ll become sluggish and irritable, and probably crave another Coke.

Coca-Cola is actually a pretty useful substance – just don’t put it inside your body. Here are 10 awesome ways to use it externally.