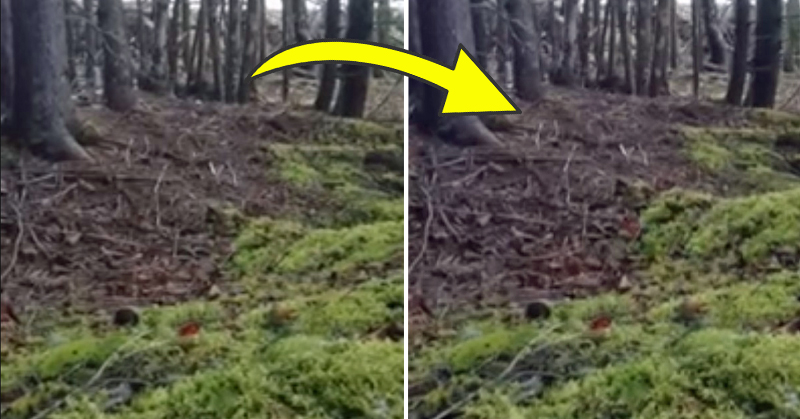 Brian Nuttall was out for a stroll in a Nova Scotia forest when he happened upon a extraordinary occurrence. And what he saw was something right out of a fantasy novel. As though a sleeping giant were nestled underneath the ground, the earth began to “breath”, moving up and down in a vertical oscillating motion.

Nuttall filmed the fascinating act of nature, and, although it seems magical, the breathing forest floor has a scientific explanation behind it.

“As I entered a patch of trees spared from clear cutting, I noticed the ground moving,” Nuttall said.

Experts agree that what seems to be the earth “breathing” is really just the roots slackening and shifting with the wind. But a phenomenon such as this isn’t an everyday occurrence, so magic or magic, Nuttall’s footage is still just as mesmerizing to watch.

“I believe the larger trees are doomed to blow down but are currently spared, the smaller trees around them help hold each other up, as the wind pushes the trees into one another,” Nuttall said.

“The punishing prevailing winds have taken their toll on the side hill, the roots have loosened and the mossy ground from the once shaded forest floor are giving way, soon to be toppled over.”

And Facebook users on Jumble Joy’s Facebook page displayed a wide variety of reactions to Nuttall’s video.
Some were more alarmed than fascinated by the “breathing” earth.

“A little creepy,” wrote Leslie Johnston. “Out there alone and this happens? Even if there is a logical explanation for it, it would be creepy……but, nice catch!”

Others posted words of caution, like Barbara Moore Guarino.  She wrote, “Not a good idea to be on earthquake faults or potentially volcanic activity areas if this is happening. Unstable ground is usually Earth’s warning to leave that area. Cool vid, though but I wouldn’t be there.”

Many voiced that they would run the other way, not film it, and others noted they would have thought the bizarre occurrence was an earthquake.

Some, however, jokingly asserted some mythological force was indeed at play. “It’s a Titan sleeping under there, I’m sure of it!” wrote Phoenix Lee. And “It’s a sleeping dragon,” said Valeria Magers Vaughn.

Watch the fascinating footage of the tree roots causing the earth to “breath”: