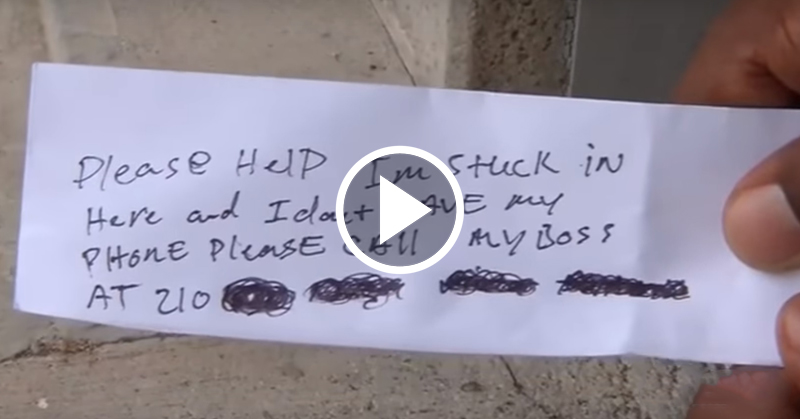 What some people thought to be a joke turned out to be a bizarre but true predicament. A contractor in Corpus Christi, Texas, while fixing an ATM, accidentally trapped himself inside of the small room located behind the device.

The man became stuck inside the ATM somewhere around 2:00 Wednesday afternoon.

The contractor, without his phone or access card, resorted to pushing out hand-written notes through the receipt slot, pleading for help. The notes read, “Please Help. I’m stuck in here, and I don’t have my phone. Please call my boss.”

Imagine you are at an ATM, pulling funds to catch a movie, but instead of a receipt you get a hand-written plea for help. It’s easy to understand why such an action would be dismissed as an attempted candid camera trick.

“We come out here, and sure enough we can hear a little voice coming from the machine,” said Officer Richard Olden. “So we are thinking this is a joke. It’s got to be a joke.”

The contractor said he ended up getting trapped while changing out an electronic lock. The police had to kick down the door in order to free the man from the room.

“We have a once in a lifetime situation that you will probably never see or hear again,” Olden said.
As far as ATM contractor work goes, it’s safe to assume getting stuck inside an ATM probably counts as a bad day at work.

Watch the news report for more information on this unusual occurrence: