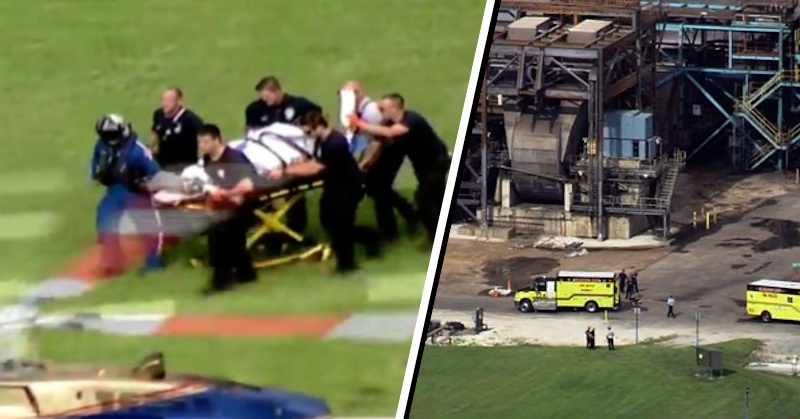 2 people were left dead and 4 critically injured after a “major burn incident” occurred inside the Big Bend Power Station (a coal-fired power plant) in Tampa, Florida.

The accident took place at approximately 4:30 p.m. on Thursday while scheduled maintenance was being performed on a slag tank.

The four survivors were taken to Tampa General Hospital with burn injuries.

Photos, along with reports from WFLA, confirm that a helicopter was used to airlift victims:

DEVELOPING: The scene is very active and @HillsFireRescue is operating in rescue mode.

The Hillsborough County Fire Rescue Department described the event as an “industrial accident”:

HCFR is still in a rescue mode at the TECO plant. Early preliminary information is pointing to an industrial accident. pic.twitter.com/MALkKU1CKm

Tampa Bay.com confirmed that of the four victims, 2 of them were a father and his step-son.

“I always worried my daddy was going to get hurt on the job,” said Frankie Atkins, the biological son of Frank Lee Jones, 55, who suffered severe burns, “I actually used to work with him years ago, and he stopped me from working there because he said it was too dangerous.”

The two victims that perished were Christopher Irvin, 40, from Tampa and Michael McCort, 60, of Riverview.

As reported by Tampa Bay.com:

“The deadly incident occurred in Unit 2, the second coal-fired boiler of four at the plant, while workers were performing routine maintenance on the slag tank.

“Hot slag is a molten by-product created when coal is burned for electricity. Chunks of it fall into cooling tanks and the remnants, which are black and glass-like, are recycled and used in sand blasting and roofing.

“Tampa Electric president and CEO Gordon Gillette said the workers were trying to unplug a blockage in the tank when the hot molten slag came rushing out onto them. Some of the workers were closer to the tank than others…”

Power plants have consistently been a topic of debate among environmentalists.

Learn more from the video below: