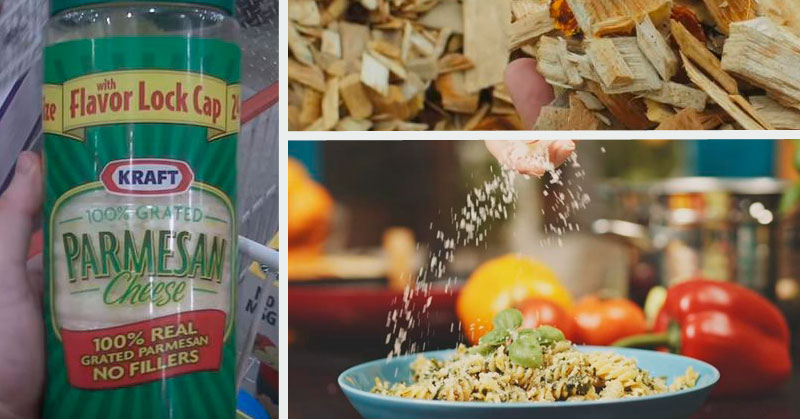 There Is A Shocking Amount of Wood in Parmesan Cheese

Imagine a night out at a cozy, Italian restaurant. You’re looking over the menu and trying to make a tough decision between the Eggplant Parmesan and and some classic cheese tortellini. You make a last minute decision to go with the Chicken Alfredo, and when the waiter sets your plate in front of you 20 minutes later, he kindly asks if you’d like some Parmesan cheese to top off your dish.

Now, imagine a giant wood chipper in place of the cheese grater, and suddenly tiny pieces of wood are flowing out of the waiter’s hands and on top of your creamy chicken Alfredo. Might just ruin your dinner, right? While this scenario may be a bit dramatic, the FDA has in fact found alarming amounts of wood pulp in grated Parmesan cheese on grocery store shelves.

It gets worse: some brands promising 100% purity contained NO Parmesan cheese at all. The FDA, reportedly acting on a tip, paid a surprise visit to a cheese factory in rural Pennsylvania to find that Castle Cheese Inc. was altering its “100% real Parmesan” with substitutes and fillers such as wood pulp, and distributing the cheese to some of America’s biggest food chains.

According to Bloomburg Business, the FDA found that there are other grated Parmesan and Romano suppliers that have been mislabeling products by filling them with too much cellulose, a common anti-clumping agent made from wood pulp. Some are also using cheaper cheddar cheese in the mix.

Castle Cheese President Michelle Myrter is scheduled to plead guilty to criminal charges, facing up to a year in prison and a $100,000 fine. No, this is not an episode of Law and Order, it’s real, folks. The biggest seller of hard Italian cheese in the U.S. is also in trouble. New Jersey-based company, Arthur Schuman Inc., mislabeled an estimated $375 million worth of cheese.

So just how deep does the rabbit hole go? Bloomburg News had store-bought grated cheese tested for wood pulp, and here’s what they found (keep in mind that a safe amount of cellulose is considered to be 2-4%):

So what do the companies have to say about this?

“We remain committed to the quality of our products” – Michael Mullen, a Kraft Heinz Co. spokesman

“We pride ourselves on the quality of products we deliver for our customers” – Mary Frances Trucco, Jewel-Osco spokeswoman

“We strongly believe that there is no cellulose present, but we are investigating this matter” – Blair Kniffin, Whole Foods Market Inc. spokeswoman

According to the FDA’s report on Castle, “no Parmesan cheese was used to manufacture” the product. So why did this happen? Money. Parmesan and Romano cheeses are more expensive for cheese manufacturers to make, so instead, they decided to throw in a little Swiss, mozzarella, white cheddar and cellulose, and label it 100% real Parmesan cheese, knowing that the chances of the consumer finding out were slim to none.

Castle has allegedly produced mainly imitation cheese for nearly 30 years; they boasted $19 million in sales in 2013. According to reports, the company has stopped making cheese, and has filed for bankruptcy.

I don’t think i’ll be shedding any tears for them, but I do think i’ll be a little more careful from now on when it comes to toppings for my spaghetti and meatballs.