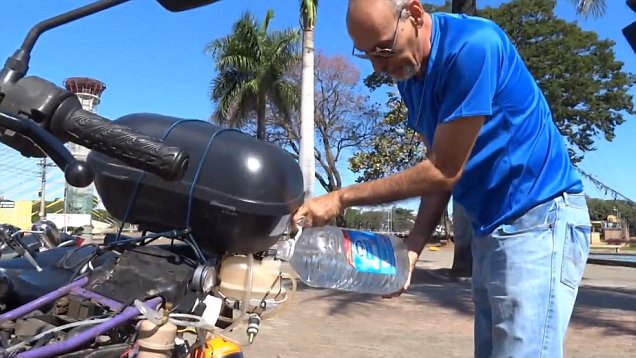 Travel Up to 310 Miles on a Litre of Water

IMAGINE that you’re on an epic road trip with a few close friends.

You are in the driver’s seat, just enjoying the journey. You take a glance at your fuel meter and realize you’re getting a bit low. “Time for a pit stop!” you yell as one of your friends verbalizes his gratitude, “Thank the LORD  – I really have to pee!”

You drive a bit further, notice an opportunity to refuel ahead at the next exit, drive down a slightly bumpy path, pass a few trees, and conveniently arrive at the local refueling station – aka a small pond.

Can you imagine what it would be like to have a vehicle that ran entirely off of good old’ H20? Sounds like a pipe dream, right? Well, maybe not so much to this man in Brazil:

Ricardo Azevedo, a brilliant inventor, based in Sao Paulo, Brazil has created a motorbike that runs COMPLETELY off of water. In the video above, he demonstrates by literally going to a local pond, filling up his water bottle, filtering the water, and pouring it directly into his fuel tank.

“Called the ‘T Power H20,’ the design features a combination of water and a single, external car battery used to produce electricity and separate the hydrogen from the water molecule. The process, involving a pipe-system, results in combustion which subsequently creates the energy necessary to power the bike.”

The story goes something like this: Ricardo was fed up with high gas prices, and so he decided to actually do something about it. He utilized what he had to solve his problem – which literally meant borrowing his son’s school textbooks to get the chemistry right. Azevedo states that the motorbike does not cause any damage to the environment, and will significantly decrease carbon monoxide emissions if it were to replace fossil fuels.

Stanley Meyer: Claimed to have created the world’s first water fuel cell in the early 90’s. He stated that an automobile retrofitted with the device could run on water instead of gasoline for fuel. Meyer’s claims about his “Water Fuel Cell” and the car that it powered were found to be fraudulent by an Ohio court in 1996. However, his mysterious death in 1998 has led many to believe that this was an act to suppress the invention. According to his family, a week after his death, the Feds came to Stan’s home and confiscated his car and research equipment.

Herman Anderson: A NASA scientist who had formerly worked on hydrogen powered rockets created a Chevy Cavalier that runs entirely off of water. Later his invention was banned from selling or manufacturing in the US because it “gave off too much radiation.”

Steve Ryan: Created a water powered motorcycle in 2005, where he demonstrated the vehicle as a featured guest on “60 Minutes”. His company, BiosFuel, went quiet just before planning to sell and distribute the invention stating, “due to political and economic reasons, we are unable to sell the motorcycles.’

Looking at all these great possibilities that never went anywhere can seem a bit defeating. It begs the question “will we ever find a true and lasting change in the field of energy?” Whenever I ask myself this question, I do realize that change does not always come easy. It does, however, come inevitably. Change IS the only constant in life – and I believe that there are many, well-intentioned humans out there who are willing to give up everything, to do the right thing.

Do you think we will see mainstream energy sources, similar to those mentioned in this article, on the market in our lifetime?