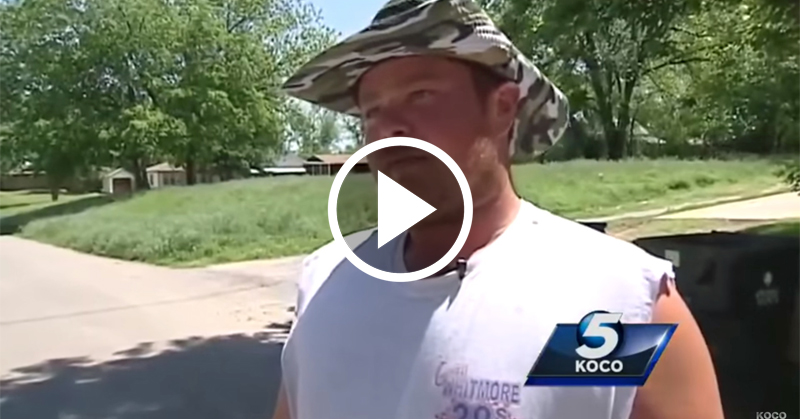 An Oklahoma man, alarmed at the sight of a motorcyclist on the run from police, took matters into his own hands to protect his neighborhood. In order to stop the speeding bike, Floyd Briggs played what he told KFOR-TV was an intense game of chicken.

He bravely walked out and stood in the street and braced himself for the impact of the motorcycle.

Considering the motorcycle had been clocked at up to 63 mph in a 30 mph zone, this was no lighthearted decision.

“I said ‘I gotta stop this guy before he hurts a little kid,'” Briggs said. “I ain’t no football player either.”
The motorcyclist swerved to avoid hitting Briggs. As a result, the driver lost control of his bike and crashed.

When the rider got up and attempted to run away, Briggs then chased after him.

“He got up, run around that fence right there, and I just went after him,” Briggs said. “I was running out of steam very quick. I’m not very aerodynamic.”

Briggs managed to pursue the rider on foot long enough for police to catch up and at last make the arrest.
In addition to his noble deed, Briggs shared a few noble words for his neighbors, who had overheard the commotion.
“I did use some language that just isn’t how I talk…Some of the words I used, I was pretty worked up. I’m sorry for that,” Briggs said.

All things considered, it is safe to assume his neighbors forgave him for such salty language.

The rider, identified as Michael Coppedge, said he was running from police because he didn’t have a license, nor did he have insurance. Coppedge faces felony charges for evading police.

A commenter on this story astutely writes, “What many folks call a redneck, we call a gentleman.”

Watch the video below to hear Briggs’ recount his heroic tale.