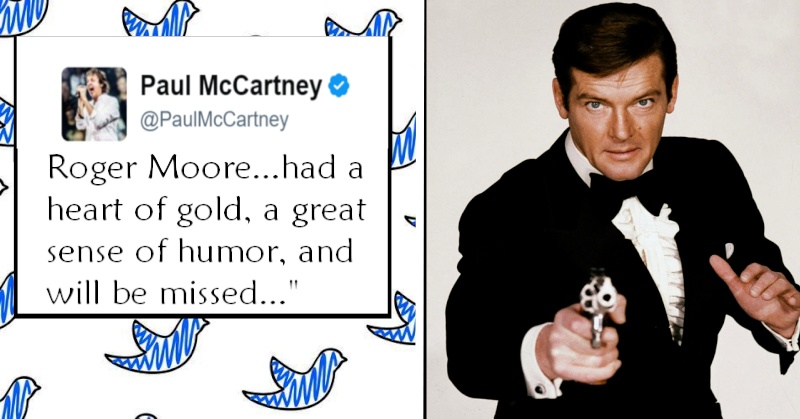 He was the face of James Bond between 1973 and 1985, and now, famed actor Roger Moore is dead at the age of 89 after fighting cancer.

“We know our own love and admiration will be magnified many times over, across the world, by people who knew him for his films, his television shows and his passionate work for UNICEF which he considered to be his greatest achievement,” reads a tweet posted on Moore’s account by his children, Geoffrey, Christian, and Deborah.

With the heaviest of hearts, we must share the awful news that our father, Sir Roger Moore, passed away today. We are all devastated. pic.twitter.com/6dhiA6dnVg

Moore was the longest serving actor playing the role of handsome British spy.

But his career did not start there. Beginning with humble roots as an animation apprentice for a film company, he would gradually land gigs in acting.

In 1945, thanks in part to his good looks, Moore nabbed a minimal role in the movie “Vacation from Marriage.”

Later, he got a big break after moving to the United States in 1953 to play a role in a TV version of “Julius Caesar.”

You Can Watch Some of Moore’s Great Moments In This Compilation Video:

Former James Bond star Sir Roger Moore died today at the age of 89 after a short battle with cancer pic.twitter.com/Dj177rUorS

Today, Moore’s approach to playing James Bond is in stark contrast to his successors.

“I look like a comedic lover,” he said in a 2014 interview with NPR, “and Sean [Connery] in particular, and Daniel Craig now, they are killers. They look like killers. I wouldn’t like to meet Daniel Craig on a dark night if I’d said anything bad about him.”

Despite his age—and his battle with cancer—IMDB’s website says Moore was cast for a role in the 2018 animated film “Troll Hunters.

Celebrities have come out on Twitter to express their sadness over Roger’s death:

Farewell dearest Roger. All our love, Andrew and Madeleine

RIP Sir Roger Moore. My first Bond and one of the first actors that I loved as a kid. And a lovely, funny, warm person to boot. Farewell.

The ultimate James Bond… so sad to hear that Roger Moore has passed away. Thoughts and prayers are with his family…??? pic.twitter.com/2iU7pl78uG

I am devastated to learn of Roger Moore’s passing. The first leading role I ever had as a Bond girl was such a new and frightening world and Roger held my hand and guided me through every process. He taught me about work ethic and humility. He was so funny, kind and thoughtful to everyone around him and in that Roger taught me what a movie star really was and should be. Through his lifelong work with UNICEF he showed me the true meaning of being a humanitarian and giving back. He was my Bond. – Jane Seymour

I am devastated today at loosing one of my oldest and closest friends ROGER MOORE, my world will never be the same again.

Dear Sir Roger Moore, It is indeed with a heavy heart that I hear the news of your passing this morning. You were a big…