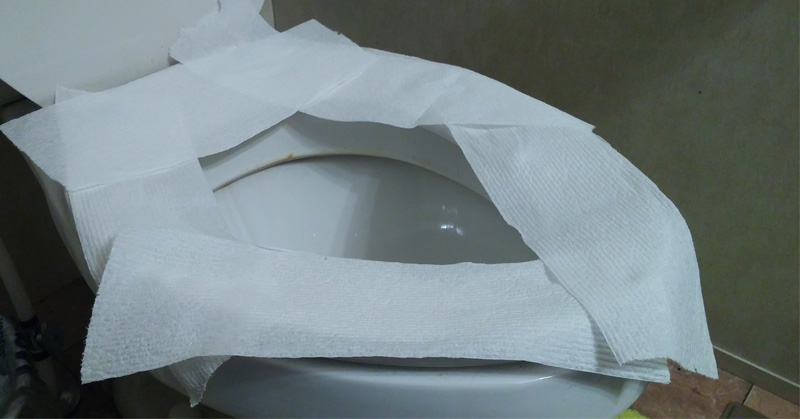 You Need to STOP Putting Toilet Paper on Public Toilet Seats for This Disgusting Reason!

You’ve done your best. You really have. You’ve attempted to hold in your bowel or bladder movement but you just can’t any longer.

And so, with great dread in your heart, you head towards the nearest public restroom and resign yourself to a battle with a multitude of germs.

If that sounds like you, don’t worry – You’re not alone in your fears.

50% of women in the U.S. won’t sit on a toilet seat in a public bathroom. Many of those who do choose to layer the toilet seat first with toilet paper to form a protective barrier.

But by doing that, you’re actually exposing yourself to a level of bacteria far more disgusting than that which actually lives on the toilet seat.

Toilet seats are designed to avoid hanging onto bacteria for too long. In fact, they’re one of the only objects found in public bathrooms that can boast that claim.

Also Read: Jet Hand Dryers Do THIS To The Air In A Bathroom!

Among the items that aren’t designed to resist contamination from bacteria like E. coli? Toilet paper.

Get ready for some serious ick.

Every time a toilet is flushed, bacteria sprays into the air around the toilet and lands on everything within at least six feet.

Yes, some of it lands on the toilet seat. But thanks to the curved, non-absorbent nature of it, that bacteria isn’t going to stay for very long.

The same can’t be said for the bacteria that lands on the toilet paper roll sitting, at most, 3 feet away from from the toilet.

Toilet paper is particularly good at hanging onto bacteria. After all, that’s why we use it for… well, y’know.

Popular health show ‘The Doctors’ actually did a segment on common items that were far dirtier than toilet seats. Toilet paper dispensers topped that list.

Toilet paper manufacturers are constantly working to make their products more absorbent – it’s very much a measure of a good toilet paper product.

It might be a good idea to bring your own toilet paper from home to reduce germ and bacteria exposure.

Toilet seat covers are no better, as this video from DNews points out.

Using a toilet seat cover or creating one from toilet paper does more to make you feel safer than it does to actually make you safer.

The solution? If you’re really concerned about picking up germs from a toilet seat (not that you particularly should be), carry your own disinfectant wipes to use on the seat.