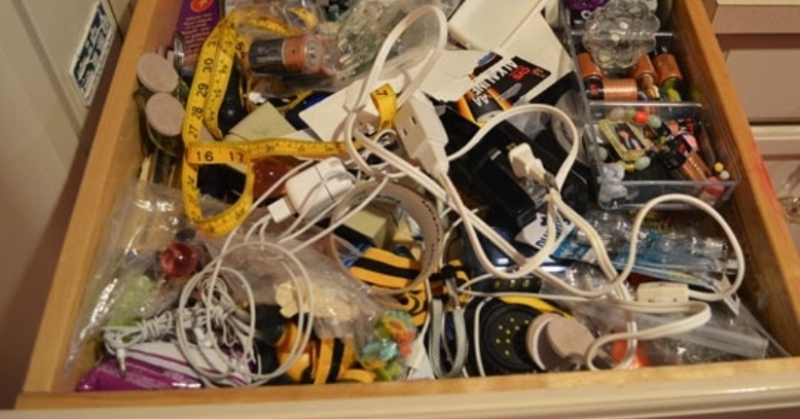 It’s Time for Spring Cleaning! Remove These 10 Things from Your Life Today!

When you think about it, the home really can be taken as a reflection of what’s going on in our lives.

But what if we looked at that statement in reverse? What if we attempted to put our minds in a state of wellbeing or happiness by taking care of the space we inhabit?

Yeah, well I’ve got some bad news for you. If we’re going to get our living spaces all spick and span so we can free up ourselves internally, that’s going to mean throwing away a lot of stuff.

But what stuff should you throw away? Indeed, it’s an age old question made all the more frustrating by the fact that every time you reach for something to toss, it feels like you’re doing this:

But I’m going to make all – well ok, some – of your spring cleaning problems go away in the next few hundred words. So get set  because I’m about to bring you a list of…

10 things you probably have laying around that you can get rid of right now.

If you’re under the age of 16, you can just skip on to the next entry. But if you were alive when everything was right in the world and people actually paid for music (kinda), the time has come.

Let’s face it, you are never going to listen to The White Album on CD again. I mean really, the whole thing is on YouTube.

In reality, as long as you’ve got your data backed up properly, there’s really little reason to keep very much physical media lying around. And until CDs show any indication of becoming as collectible as vinyl, they’re an easy target to get rid of.

Yeah, nice try. You were fascinating 10 years ago.

Does anybody really keep receipts for any reason other than their being too awkward to decline?

You can really only hold out hope for a certain amount of time. And that time came and went. Several months ago.

If you haven’t found that lost sock by now, it’s time to say farewell to the single side. Throw it out. C’mon, you can do it.

4. Clothes With Holes That Can’t Be Fixed

Do I even really need to explain this one? If you can feel a draft where there was no draft previously, it’s time for a new pair of jeans. Or just toss the old ones and make space by not buying a new pair. You have five other ones, haven’t you?

This one’s really important, even if only from a safety perspective when it comes to disposing of your prescription medications in a safe way. Look for a community drug take-back program or a DEA-authorized medicine collector.

This also extends to old medicine bottles – scratch your name off them and chuck them out of your drawer and into the trash. You shouldn’t be using commercial medicine anyway. Just throw it all out!

You won’t even believe how much easier your life will become if you throw away old pens as soon as they die. Otherwise, you’re just setting yourself up for untold months of picking up handfuls of pens from your desk drawer, trying to see which is the one that works.

There’s actually deep science behind why we get so sentimental and attached to things from particular moments in our lives.

And indeed, it’s important to hang onto a few things that are of utmost importance in your life. So if prom was the night you met your husband, keep the prom dress. If he’s now your ex husband? The dress can go.

Those boxes all your stuff came in when you moved houses? Stomp onth em and toss. You will always be able to buy more boxes. I guarantee it. They’ll never go out of style, not as long as we have cats.

It’s a good idea to keep a couple lying around in case you need a beater to take on vacation. But if you keep up to date with technology, it’s easy to amass a stockpile of old devices in no time. Free up some cash and sell what you can – otherwise, consider donating your old phone to charity.

It happens. Like the archetypal sock gone astray, container lids go missing. After a while, when you’ve given up searching, throw away those old dishes.

And then, the next time you roll away your stove and find all the covers were hiding under there…