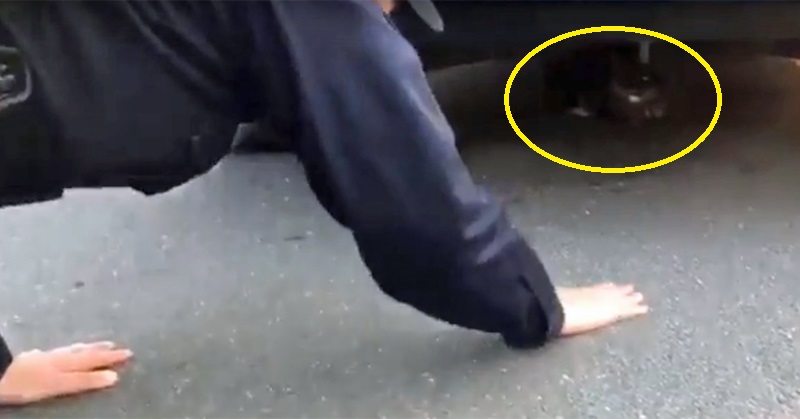 Thousands of families have been displaced by the California wildfires and many of them didn’t have time to get their pets out before having to evacuate. One man, Ed Ratliff, says he only had time to get in his car and go when the fires started quickly approaching his home.

Ed’s cat is a serious survivor. Police found Ed’s cat two days after the fire underneath a car. A video posted to a YouTube account called BenRat’s Vids shows two heroic police officers saving Ed’s cat after the Tubbs fires. The poor little cat’s whiskers are charred but he’s are okay after officers coaxed the cat out from underneath a car. Once the officers got the cat out they put a leash on him and take him to Sonoma County Animal Services main shelter. Sadly, Ed’s house burnt down in the Tubbs fire, which is why he thought he’d never see his cat again. Fortunately for him though, his feline companion is going to be just fine, thanks to two fine police officers.

Watch the video of two police officers rescuing Ed Ratliff’s cat from under a car after the Tubbs fire:

Lucky for Ed his little cat made it through the fires. While his cat may have some burnt paws he was still reunited with them at an animal shelter. The YouTube account Hayes Ashleey posted a video of the reunion. According to the video there are nearly 65 animals at the Sonoma County Animal Services shelter alone. The touching video shows Ed being reunited with his cat, who he says is just like a dog in regards to companionship.