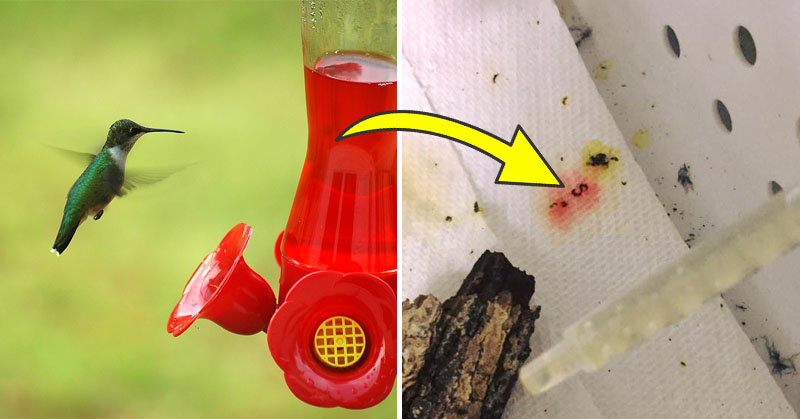 This is Why You Should Never Give Red Nectar To Hummingbirds

Spring is here! Time for flowers, sunshine and hummingbirds. And what a joy it is to see them zipping around your home! Hummingbirds are wonderful little creatures who are found in all parts of the Americas.  You might be one of many people who hang a feeder outside your home, hoping to attract them. But for the sake of the health of these little birds, this happy seasonal tradition needs one slight but crucial adjustment.

Don’t give hummingbirds red dye nectar. Doing so can have a major negative impact on their health.

The folks over at Happinest shared their scary experience. Their rehabber, Sherry Teas, took in several hummingbirds that were lethargic and unable to fly. When the little darlings showed no signs of physical injury, Sherry was concerned. She grew all the more concerned when she saw an undeniable red color in their droppings.
Sherry began giving them a diet of clear sugar water. Sadly, not all of the hummingbirds survived, but the ones that did recovered with case rest, changed diet, and prescription protein nectar.

After about 48 hours, the hummingbirds’ droppings returned to a normal, healthy color. The rescued hummingbirds continued to improve and were released 7 to 10 days later.

When the people at Happinest spoke to fellow rehabbers, they found similar stories with the hummingbirds in their own communities. They shared their findings on Facebook and many hummingbird lovers were shocked to find out the truth behind red dye nectar. They were also pleased to find out that the homemade alternative is much cheaper than the nectar they buy in stores.

Please do NOT use red hummingbird nectar! I'm getting so many hummers who can't fly because they are very sick and ALL…

Instead of red dye nectar, opt for this homemade recipe:

Do not substitute sugar with a different sweetener. Do not add red nectar, red dye, honey or anything else to the mixture.

Boiling the water used for the hummingbirds not only kills most bacteria and viruses, it also removes many other microorganisms and some chemicals.

And here are some bonus tips to help keep hummingbirds healthy:

For more information on making your own hummingbird nectar, watch the video: