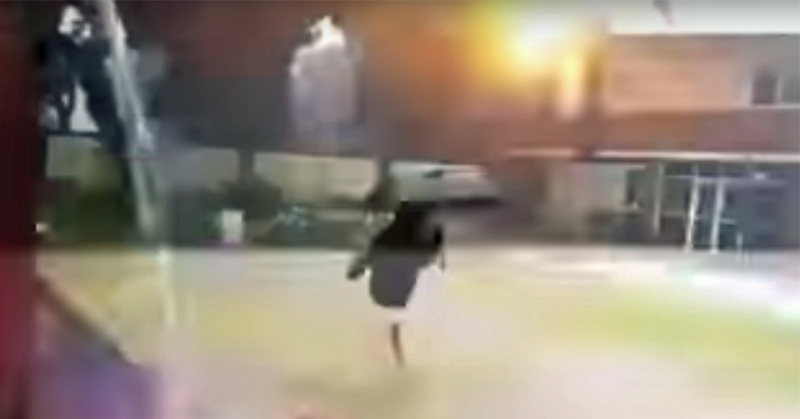 A mother her 12-year-old son playing around with an umbrella ended up capturing his brush with death as a lightning bolt struck just feet away.

The video shows a pre-teen boy standing under a roof drainpipe, with water pouring out onto the umbrella. Seconds later, he walks out into a garden in the city of Posadas, Argentina, located in the northeastern province of Misiones.

Out of nowhere, a powerful bolt of lightning suddenly strikes down just steps in front of the boy — causing a nearby fence to erupt in flames.

“It was morning, I was with my daughter in the room calming her, because she is scared of lightning,” Kotur said. “Then the lady who works in my house told me that my son was walking in the rain and I started filming because I was making a joke, and right next to him the lightning struck. Thank God nothing happened to him.”

Not everyone in the region were so fortunate during the intense storm. Central European News has reported that brothers Sinforiano Venialgo Vazquez, 43, and Simon Venialgo Vazquez, 41, were killed by lightning, after being struck near their home in the Paraguayan town of San Pedro del Parana — a mere 68 miles from where the young boy was nearly hit by a bolt on the video above.

The cause of death in both cases was electrocution, with no further details were available, according to the news report.

Additionally, lightning strikes reportedly killed animals in the Santa Rosa area, on the Argentine side of the Parana River.

In March, David Wolfe shared video of a tree struck by a lightning bolt, the spectacular video of which must be seen to be believed!