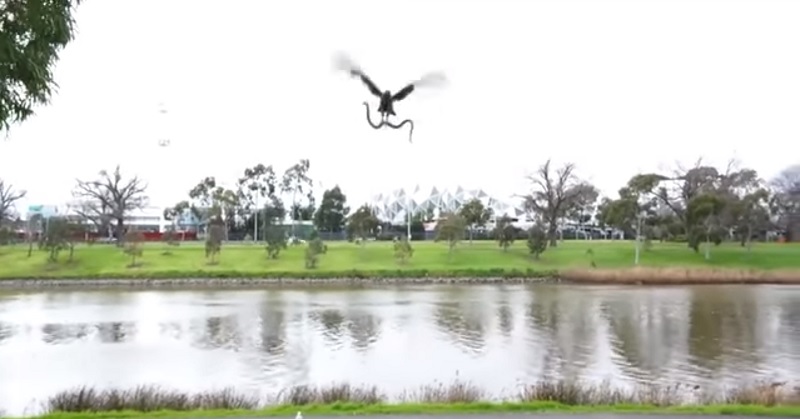 Hawks are super cool, graceful birds. One family visiting Australia got to see the awesomeness up close and personal while they were out enjoying a barbecue. One of the tourists, Douglas Wong, quickly pulled out his phone to snap some footage of the bird as it flew around a small lake.

Eventually, it swooped low to the ground and appeared to pick something up.

“We didn’t know it was a snake until it got really close and my uncle ran,” Douglas later told The Daily Mail in an interview.

As if the hawk carrying the snake towards the family wasn’t terrifying enough, the bird decided to drop it at the exact moment it flew overhead. The snake appears to hit the Douglas before slithering towards another family member.

See their reaction below!

Some viewers have accused Douglas of creating a fake video but he insists it was a totally true – albeit bizarre – incident.

“I just took it on my phone so I can’t really prove it so people keep asking but I don’t mind,” he told The Daily Mail.

Workers from the Australian Wildlife Park have said the footage could very well be real. According to them, the hawk could have been bitten by the snake, prompting it to let go.

While it’s not clear what species the snake was, Australia is known for its deadly snakes. If the video is real, Douglas and his family are incredibly lucky they were not harmed.

How would you react if this happened to you? Share your thoughts on this video in the comments below!