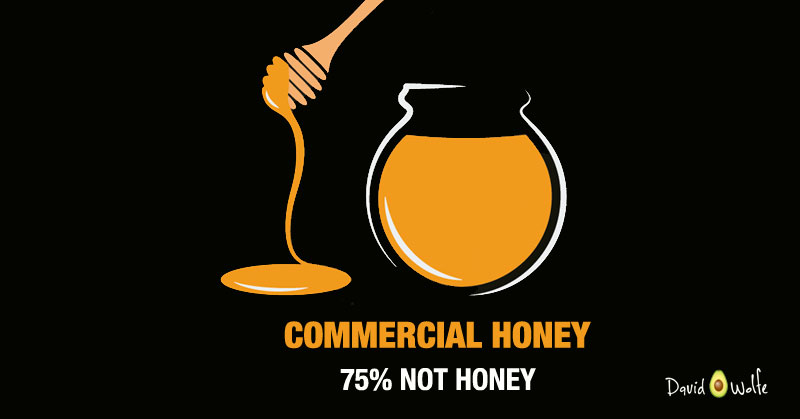 Pooh is not impressed.

Food Safety News tested honey sold in U.S. grocery stores and found that, alarmingly, over 75% of that honey has been filtered of the pollen bees produce, making it – by definition – not actual honey.

FSN states that the removal of pollen from commercially-sold honey would cause the suddenly-so-much-more-mysterious sticky stuff sitting on the shelves at your local grocer to ‘flunk’ the standards testing undergone in other countries.

According to an FDA document, any product that has been filtered to the degree where it contains no pollen can no longer be considered honey. But they’re not doing anything to check just how much pollen manufacturers are leaving in their products.

The list of offenders is staggering. The following are just of few of the honey products tested by FSN that were shown to have no traces of pollen, regardless of jar size:

Why would so many brands go through such extreme lengths to remove pollen from their ‘honey’ products? And make no mistake; the lengths are extreme. Ultra-filtering is a very high tech process, according to FSN, through which honey is heated, watered down and forced through a series of small filters that remove pollen.

This effectively, according to FSN, removes any hope of one figuring out the source of the honey.

Manufacturers in countries like China and India have been flooding the American market with honey that doesn’t meet the health standards of places like Europe. These honey products, in addition to not being actual honey due to their lack of pollen, are often contaminated with antibiotics and heavy metal (not the cool kind).

“There is only one reason to ultra-filter honey and there’s nothing good about it,” Richard Adee, beekeeper who produces 7 million pounds of honey each year, told Food Safety News.

“It’s no secret to anyone in the business that the only reason all the pollen is filtered out is to hide where it initially came from and the fact is that in almost all cases, that is China.”

But if you think 75% is bad, wait till you hear findings from other sample sources tested by FSN:

The good news is that you’re not at a complete loss if you’re hunting for honey that has pollen in it. FSN found that honey from co-ops, farmers markets and companies like Trader Joes had normal pollen levels, so if you’re on the hunt for some honey, those spots are a good place to check.