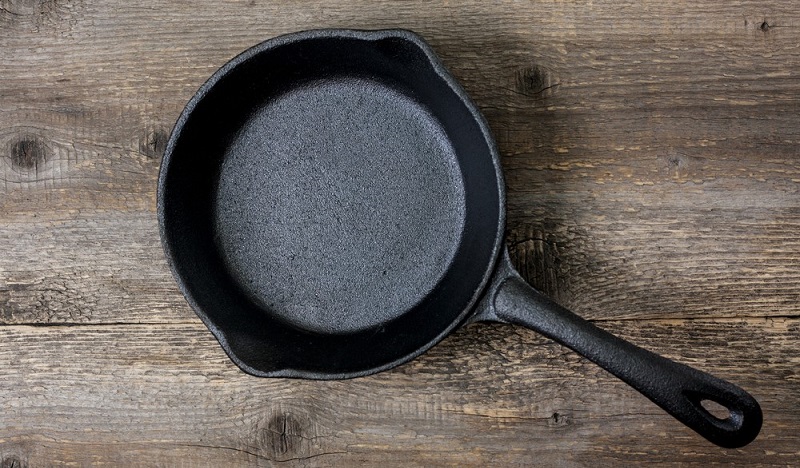 Using a cast iron skillet in the kitchen these days might seem a bit old-fashioned. You may remember your parents or grandparents using them to make cornbread, cake or even pies. With all of the shiny new cookware options, why go back in time? Not only is a cast iron skillet more efficient in the kitchen, but using it as a replacement for a non-stick pan may save you from inhaling harmful chemicals, and, in turn, boost your health.

The Environmental Working Group released a study on non-stick cookware (Teflon), that showed the cookware reached temperatures at which coating breaks and emits toxic particles and gases that are potentially dangerous to human health, after only a few minutes on a stove top. The repellent coating that keeps food from sticking to the pans contains perfluorocarbons, or PFCs, a chemical linked to liver damage, cancer, developmental problems, thyroid disease, reduced fertility and even onset of early menopause. This chemical gets released and inhaled in the form of fumes when the pan is heated. The Environmental Health Perspectives journal found that these kinds of toxins can stay in the body for almost four years.

Cast iron skillets do not emit the harmful chemicals that non-stick pans do, but they do add a little something extra to your food — iron. Iron deficiency is the most common nutritional deficiency in the world, affecting 10% of American women. Cooking food in a cast-iron skillet can increase iron content by as much as 20 times, depending on acidity. Iron plays a crucial role in both mental and physical performance, as it helps to strengthen the body’s immune system and maintain energy levels.

In case the toxic fumes aren’t a reason enough to switch, a cast iron skillet does not scratch, and it distributes heat evenly, which helps keep food moist and flavorful by sealing in juices. Often passed down from one generation to the next, cast iron skillets last a long time, so they are absolutely worth the buy. They can also be used over any heating source — a stove top, an oven, even a campfire.

Once a skillet is well-seasoned, it is non-stick. You’ll not only have an easier time getting your food out when it is ready, but you can use less oil in the pan, which can cut your fat intake and lead to healthier meals. Cleaning a cast iron skillet is easier than you might think. Simply scrub the skillet with hot water and a stiff brush, and dry. You’ll want to stay away from the use of soap on a cast iron skillet.

1. Cover the bottom of the skillet with a thick layer of kosher salt and a half inch of cooking oil.
2. Heat until the oil starts to smoke.
3. Pour the salt and oil into a bowl and use paper towels to rub the inside of the skillet until smooth.

All this might just persuade you to dust off that reliable old skillet and make it a staple for healthy cooking in your kitchen.