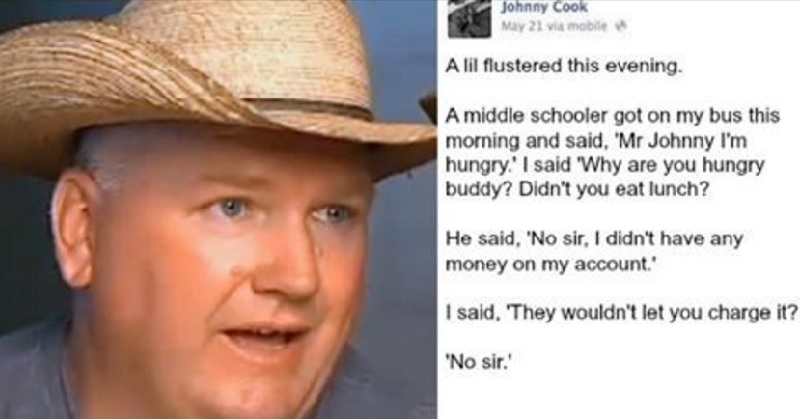 During the last week of school, bus driver Johnny Cook was approached by a middle school student. The boy complained that he was starving – his lunch card was 40 cents short and the cafeteria staff refused to feed him.

Cook was shocked. He continued thinking about that boy’s plight even after he had arrived home from work. Frustrated, he took to Facebook and told his friends what had happened.

A middle schooler got on my bus this evening and said mr johnny im hungry. I said why are you hungry buddy? Didn’t you eat lunch ?

He said no sir I didn’t have any money on my account. I said they would let you charge it? No sir.

Huh! What! This child is already on reduced lunch and we can’t let him eat. Are you kidding me? I’m certain there was leftover food thrown away today.

But kids were turned away because they didn’t have .40 on there account .
As a tax payer, I would much rather feed a child than throw it away.

His friends and family agreed with him, making the post go viral overnight.

Too bad his employers weren’t as empathetic. The following morning, he was called into the school office by a school superintendent.

Cook was given two options:

He could take back his Facebook status and issue an apology or he could be terminated. The reason? The school superintendent says he went against the school’s Facebook policy.

Cook wholeheartedly believed in what he said and he wasn’t about to take it back. And so, that morning, he left his job as a bus driver for Haralson County Middle School.

He has zero regrets. 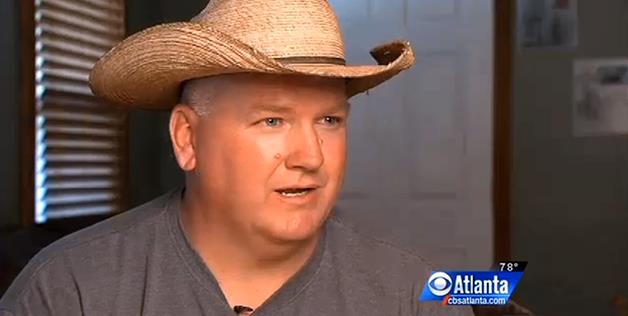 Many petitions, like this one, have popped up imploring the school board to give Johnny Cook his job back. His story has blown up and raised discussion about the educational system.

Johnny Cook has set up a Facebook page, “Johnny’s Kids” to highlight similar issues of neglect by the educational system.

What do you think? Should Johnny Cook have been fired for what he did? Drop us a note in the comment to share your thoughts! Check out this video to hear more about the story.