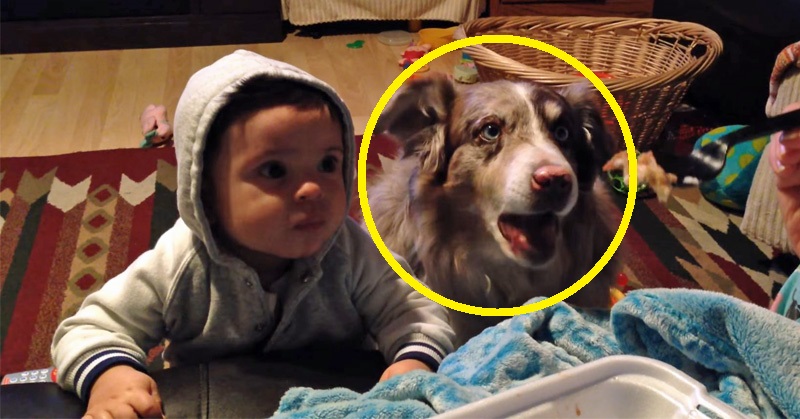 A heartwarming video from the Sam Giovanini YouTube account shows a mother using special food from a takeout container to try to coax her daughter into saying “Mama.” However, man’s best friend is sitting right next to the baby and immediately starts making grumbling noises because he too would like some of the delicious food in that foam container. You won’t believe who was able to say Mama first in this hilarious viral video.

While many people have been able to train their dogs to do a lot of things, you won’t believe what this one is able to do. The video says that this loyal pup is trained but there’s not much training that can teach a dog to do this.

After a few seconds of Mom coaxing the baby to say “Mama,” the dog gets as close to saying “Mama” as a dog possibly can. The dog barks Mama so well that the baby even seems to notice that the dog had managed to say it before them and reacted by reaching out for the dog’s snout. This cute little Australian Shepherd hilariously upstages the even cuter baby and the baby doesn’t seem too pleased about it. According to the video the genius dog did get a treat as a reward for being able to say “Mama.” The incredible video has over ten and a half million views and counting. Can your dog do anything like this?

Watch the hilarious video of an adorable Australian Shepherd saying “Mama” while trying to get a treat: