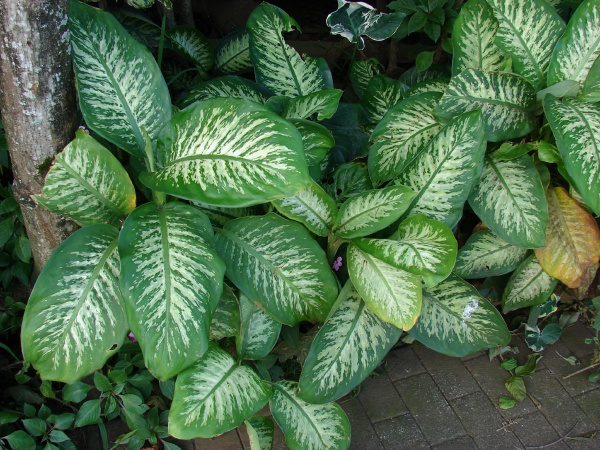 WARNING: The Truth About This Highly Poisonous Houseplant that Kills You in 15 Minutes

Looks like a beautiful plant, doesn’t it? Large leaves, with a cool pattern that looks almost sketched.

A sketched look for a sketchy plant. This is known as the dieffenbachia, from a family of plants native to the tropical Americas according to the National Resources Conservation Service.

This is a plant many people keep around their houses and offices, unsurprisingly due to how beautiful it is. However, it is not safe for small children or pets.

According to the U.S. National Library of Medicine, poisoning can occur if one eats the leaves, stalk or root of the dieffenbachia plant. This is due to the oxalic acid found therein, as well as Asparagine, a protein found in the plant.

Symptoms of poisoning from the plant (take note, parents) include abdominal pain, burns where the acid has touched skin, convulsions, mouth pain, shock and vomiting. (Symptoms apply to children.)

This plant is considered moderately poisonous to both cats and dogs. Signs of ingestion include pawing at face (secondary to oral pain), drooling, foaming, and vomiting. Moderate to severe swelling of the lips, tongue, oral cavity, and upper airway may also be seen, making it difficult to breathe or swallow. (Source)

However, over ingestion could lead to death. We have all seen those dogs that never stop eating.

The sap from the dieffenbachia is highly toxic, but for grown adults it is nothing to panic about.

Patients with a history of oral exposure (chewing and/or swallowing) have been reported to have severe swelling, drooling, dysphagia, and respiratory compromise, but this is not common. In a large retrospective study of 188 patients with plant oxalate exposure, all cases were determined to be minor and all resolved with minor or no treatment. Patients can also experience dermal and ocular exposure, resulting in contact dermatitis or keratoconjunctivitis. Symptoms that result from these routes of exposure also appear to resolve with supportive care. The severe complication of aortoesophageal fistula following ingestion of a dieffenbachia leaf in a girl aged 12.5 years has been described in a single 2005 case report. The girl recovered following surgical intervention. (Source)

You should, of course, avoid all of this by not having the plant around if you have small children or curious pets. This plant is poisonous to even adults, so care must be taken to ensure that people in the environment are aware of the adverse effects, which can include blindness if one touches the plant and then rubs his or her eyes.

It is number two on this person’s deadliest poisonous plants list!

Stay safe and perhaps consider one of the many other plants that do more good than harm. Looking for a plant to put in your bedroom? We’ve got you covered. How about a plant to purify the air? We’ve got that covered as well.