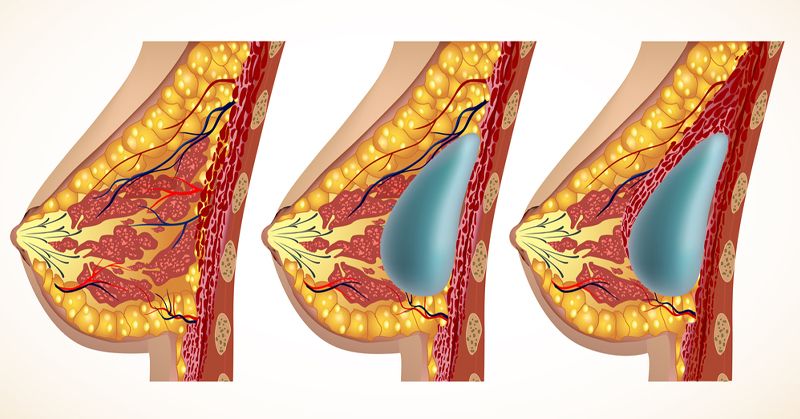 Danger: Research Finds Breast Implants are Doing THIS to Your Body!

Opinions about plastic surgery range greatly from person to person. Having reconstructive surgery after an accident or an illness is one thing, but altering physical appearance because one doesn’t like the way they look can be a controversial topic. Some say our bodies are temples and we should be happy with the way we were made. Others say, if it makes you happy, why not?

Regardless of which side of the fence you tend to stand on, the fact is that many women don’t realize how great of a risk they are taking with plastic surgery – specifically breast augmentation. Millions of women have had implants to make themselves bigger to feel more confident. But do they completely understand the health risks? Whether you’re considering a breast augmentation, you know someone who has had one, or you just like to stay informed, this article is for you.

The two types of breast implants that are most common in the U.S. are saline and silicone. Both consist of a silicone outer shell – the difference comes in what’s inside the implants. Saline implants are filled with saline or sterile saltwater, while silicone breast implants are filled with silicone gel. Neither are lifetime-guaranteed. They’ll most likely need replaced after a few years. Pregnancy, weight loss and menopause can affect the appearance of augmented breasts, and regular examinations are required to evaluate health and the condition of the implants.

Silicone breast implants first came about in 1962. In the 1980’s their popularity grew, but many women claimed there was a link between ruptured silicone gel implants and a greater risk of immunological disorders such as lupus, arthritis and fibromyalgia. No studies established a concrete connection, but in 1992, the FDA restricted the use of silicone breast implants to women needing reconstructive surgery after battling breast cancer. More than 170,000 U.S. women filed lawsuits against Dow Corning — one of the world’s main manufacturers of silicone implants. The company never admitted any wrongdoing, but they ended up shelling out $3.2 billion to settle the claims.

In 2006, the FDA approved the sale of certain silicone breast implants, and they were back on the market – for women 22 years of age or older. According to the FDA, “Studies to date no not indicate that silicone gel-filled breast implants cause breast cancer, reproductive problems, or connective tissue disease… however, no study has been large enough or long enough to completely rule out these and other rare complications.”

In other words, “these are safe… because we haven’t studied them enough to prove that they’re not.” Wait, what?!

The FDA also states that the most common complications are tightening of the area around the implant, additional surgeries and implant removal, along with a tear or hole in the outer shell (an implant rupture), wrinkling, uneven appearance, scarring, pain and infection. (Did you write all those down?)

Saline implants — filled with a saltwater solution — are regarded by some to be safer than silicone in the event of a rupture or a leak. How much damage can saltwater do, right? Dr. Kolb, author of The Naked Truth About Breast Implants: From Harm to Healing, explained that the problem with saline implants is that if the valve used to fill the implant is damaged — which can occur in an accident or during a mammogram — it can lead to serious problems with bacterial and fungal growth.

In an interview with Dr. Mercola, she explained, “Once the valve is damaged, especially in certain implants, mold and bacteria can grow inside the implant. I’ve had patients who have had, inside the saline in this implant, a mold called pennicillium growing. Whenever somebody hugged them too hard or even breast exams… the patient can become very ill.”

Once again, the FDA advises, “There is no apparent association between saline-filled breast implants and connective tissue disease, breast cancer or reproductive problems… however, in order to rule our these and other rare complications, studies would need to be much larger and longer than those conducted so far.”

After France’s National Cancer Institute found 18 cases of anaplastic large cell lymphoma to be directly linked to women with silicone breast implants, the country now orders that all breast implants come with a cancer warning. ALCL is a type of non-Hodgkin’s lymphoma that affects the blood.

A study conducted at Cambridge University in the UK found that nearly all cases of ALCL in breasts occurred in patients who had undergone a breast augmentation. The why isn’t clear, but the link is. In 2013, 300,000 American women underwent the operation. Of these women, around 80% chose the procedure for cosmetic reasons, while around 20% had breast implants following breast cancer. Another statistic that might interest you — Although mammograms can be performed in ways that minimize the interference of implants, approximately 55% of breast tumors will be hidden in women with implants.

Studies have confirmed that women have an overall higher risk of suicide after getting breast implants. Loren Lipworth, ScD helped to conduct the study. “It appeared there was no excess risk of suicide in the first 10 years after receiving a breast implant, but after that, the risk went up and continued to go up,” she said. “There was a 4.5-fold risk for 10 years after surgery and a sixfold risk for 20 or more years.”

Most experts agree that the link is probably not related to silicone toxicity, although it cannot be ruled out. Instead, the data suggests that many women choosing to get breast implants have a psychiatric illness prior to the surgery that results in a high risk of suicide, along with deaths related to alcohol or drug abuse.

The decision to undergo a breast augmentation is a personal one, but being completely informed about all of the possible side effects and health risks is step one to making that decision.