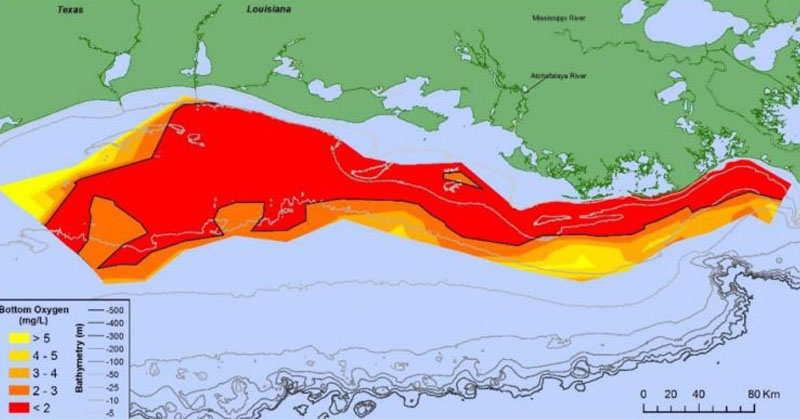 Slowly but inexorably, the we are seeing the negative impacts of the meat industry. For example, cattle feeding operations use vast resources to feed cows. This leads some to speculate about its effects on climate change. Could the Gulf of Mexico dead zone be one of them?

Now, there’s a new menace more tangible than ever before: the complete decimation of life in our oceans.

The Gulf of Mexico Dead Zone

Recently, media outlets revealed that the Gulf of Mexico contains one of the largest dead zones on the planet.

A dead zone is an area in which there is little to no sea life—and according to the environmentalist group “Mighty Earth”; they’ve just traced it all the way back one of America’s largest meat producers: Tyson Foods.

“[There are] companies responsible for the widespread manure and fertilizer pollution contaminating water from the Heartland to the Gulf,” reads a press release by Mighty Earth, “Much of this pollution comes from the vast quantities of corn and soy used to raise meat animals, and has caused one of the largest Dead Zones on record in the Gulf of Mexico this year.”

Nitrates and toxins emanating from numerous farms have been leaking into rivers, which eventually make their way into the Gulf.

The increase in nitrates and toxins leads to a large increase in the amount of phytoplankton and algae—when both of these life forms die, they attract bacteria, which then consume the oxygen in the water.

The oxygen-deprived water then becomes inhabitable for most lifeforms, driving them out of the area and creating what has now become an 8,200 square mile dead zone in the Gulf of Mexico.

Might Earth’s investigation then used a unique method to determine which companies were prompting farms to increase production which, by extension, increased toxins in local streams and rivers.

“To identify the companies responsible, the investigation maps the supply chains of the top meat and feed companies, and overlays it with data showing elevated nitrate concentrations in waterways that are experiencing high levels of fertilizer pollution,” reads the Might Earth press release. 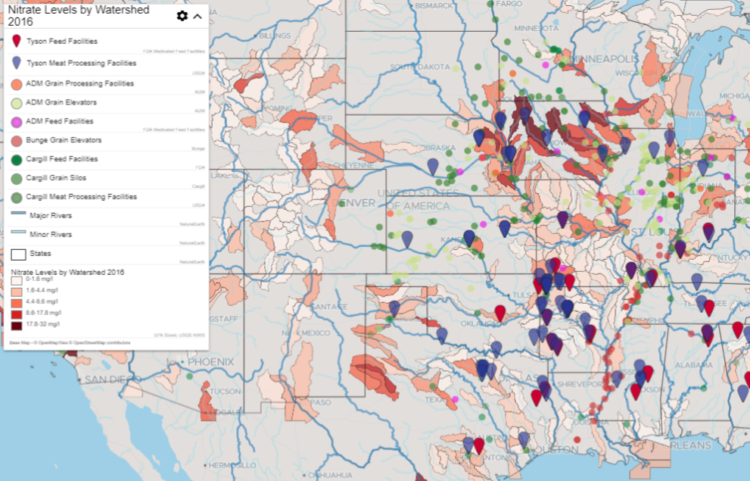 “America’s largest meat company, Tyson Foods, stood out for its expansive footprint in all the regions suffering the worst pollution impacts from industrial meat and feed production,” reads the press release.

“Tyson produces one out of every five pounds of meat produced in the United States, and owns brands like Jimmy Dean, Hillshire Farm, Ball Park, and Sara Lee, in addition to selling to fast food retailers like McDonalds.

“The company is consistently ranked among the top polluters in America, although Tyson’s new CEO has declared that a focus on sustainability will be at the center of the company’s future plans.”

The revelations are just further proof that mass-production meat entails serious problems for the environment.

“Americans should not have to choose between producing food and having healthy clean water,” said Lucia Von Reusner, a campaign director at Mighty Earth, “Big meat companies like Tyson have left a trail of pollution across the country, and have a responsibility to their customers and the public to clean it up.”

Perhaps another alternative is to stop eating meat.