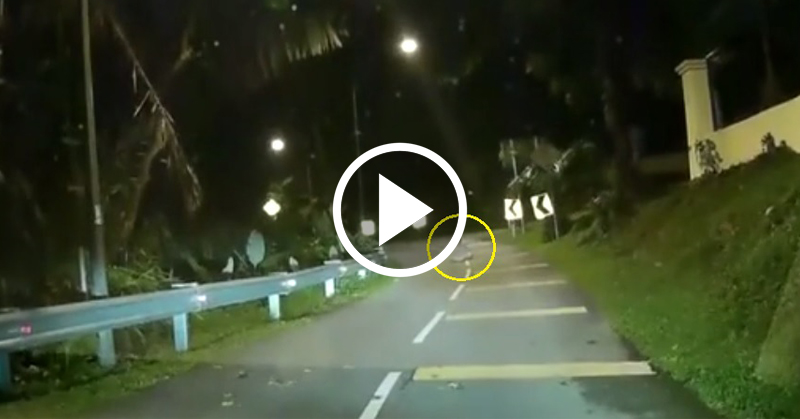 It’s happened to everyone. People often believe they see things in the corners of their eyes when they are driving at night. Maybe it’s a stray deer, a large piece of trash, or a ghostly image.

More often than not, one is driving too fast to get a proper look and they are left with the eternal question. “What did I just see on the side of the road?”

Well, one man is lucky enough to have a pretty good idea of what he saw one night on a dark road.

Aswan Yap, 25, was driving with a friend on a small road in Kuala Lumpur, Malaysia when they encountered a ghostly image in the middle of the road. As you can see in the video below, he stops abruptly and reverses quite quickly. He later performed a u-turn and took a longer route home.

What we cannot see in the video is that the dash cam warning lights came on when they first saw the image.

“I was scared, there’s no doubt about it. For me, honestly I thought it was a ghost. When we checked the car’s error logs it said that the car thought it had crashed, which was also really spooky.”

This section of road is located in the Bukit Tunku district which is believed to be home to a haunted, abandoned mansion.

Check out the video below! Is it a ghost?

Aswan has this to add about his encounter with this strange ghostly image:

“We’ve watched enough horror movies to know you don’t mess around with this. Just when we stopped, all the warning lights came on and the dash cam started showing an error. If you honestly think that’s a cat, trash can, or whatever on the road, then I really hope you don’t have a driver’s license. If your eyesight is so bad, you really shouldn’t be behind the wheel. This is not a joke. This happened around 10 pm between Lake Gardens and Kenny Hills. Some people are saying it’s probably someone playing a prank or that it’s someone trying to rob us. Even if we ignore the fact that the car’s dashboard was lighting up, you would still want to get off the road as quickly as possible.”