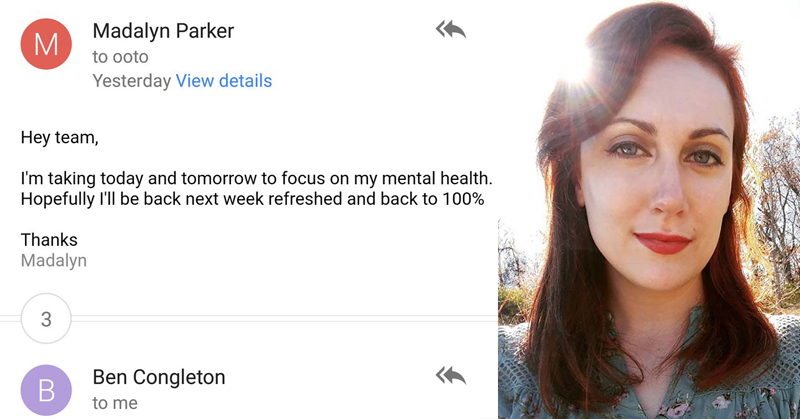 Parker, who works for Olark, recently needed a few days off to “focus on her mental health.”

She sent out an email alerting her co-workers to her plans, and the CEO of her company sent a return message.

While many of us might be used to push back from management for such a request, the CEO, Ben Congleton, responded with something that took the internet by surprise.

When the CEO responds to your out of the office email about taking sick leave for mental health and reaffirms your decision. ? pic.twitter.com/6BvJVCJJFq

I'm so jealous. I have never had a job where a mental health day would have been tolerated. Kudos to your CEO!

Others, however, questioned the importance of taking a mental health day, such as one Twitter user who said,

“Not sure about what’s really important, though. Personal (mental) health, or ability to work?”

And while Parker’s boss was understanding and even went the extra step as to praise her, his actions most would consider rare.  Here is another story that didn’t end well for the employee in question:

The truth is, if you have a mental illness, you do have certain rights in the workplace, depending on where you live. However, that’s where it gets tricky. Taking time off due to being stressed out is often treated as not a viable reason for missing work.

“Most paid sick leave laws prohibit employers from requiring an employee to disclose the underlying diagnosis of their condition,” says Melissa Burdorf, attorney and legal editor at XpertHR.

It all depends on your employer. Some bosses and CEOs understand that if their employees are stressed out, they will not bring their best selves to work.

“An employer may want to allow stress-induced sick days regardless of whether they are required to do so,” Burdorf says.

“Stress affects job performance and can act as a precursor to bigger issues,” Burdorf says.

“Allowing an employee to take off for stress-related concerns might help them come back a much stronger worker.”

Of course, as an employee, you are part of a team that is relying on you.  A day or two off here and there is one thing, but too much skipping out on work can lead to negative consequences. You should ensure you’re not taking advantage of an understanding boss, but at the same time, you should be mindful of when you simply need a break.

In June, Huffington Post challenged its readers to take a mental health day with the #TakeABreak hashtag. If you’re feeling stressed to the max, you might want to look into taking a break yourself. But, if your job is on the line, maybe there are some other avenues you can take to help alleviate stress.