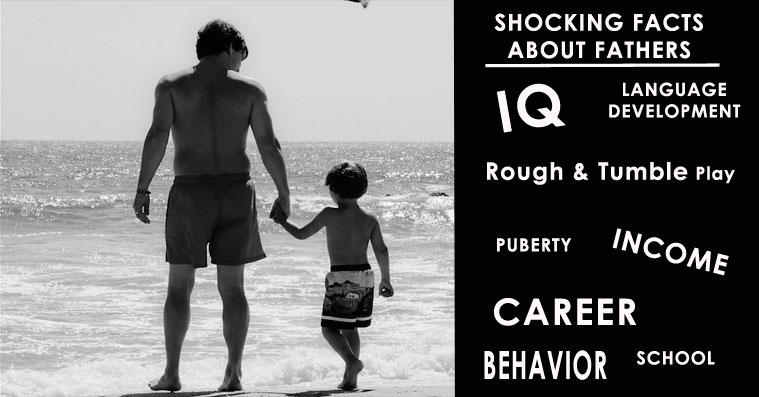 8 Surprising Truths About Fathers And The Development of Kids

Estimates put Father’s Day spending at $12.7 billion annually. How much is spent on mother’s day? $20.7 billion.

So yeah, mother’s day is a much larger celebration – and for a variety of reasons.

And though the love we have for our mothers makes total sense considering all they’ve done and been through for us, you might be surprised to learn just how just how powerful the connection between a father and their children can also be.

And the results flow both ways, with fathers affecting children and children affecting fathers.

Let’s take a look at 8 surprising facts about fathers and their role in the development of their children.

During their spouse’s pregnancy, fathers experience as much as a 40% drop in testosterone. This can be attributed to the fact that there is a perceived decrease in male competition once their ‘mating’ partner has been selected and impregnated.

Slightly more of a mystery is the increase in fathers of a hormone called prolactin, which is associated with nursing in mothers. The evolutionary need for this is somewhat unclear but it happens! (SOURCE)

#2. Rough and tumble play causes chemical bonding similar to that in mothers.

The scientific name for the interaction that causes this chemical change is ‘rough and tumble play.’ The name alone suggests that this sort of interaction is much more frequent in fathers.

Kids who receive healthy play with their fathers are more likely to adapt to events in the real world once they leave the home.

Paul Raeburn even suggests that single mothers focus on ‘rough and tumble play’ for the benefit of their children. (SOURCE)

A father’s involvement with their child was found to be critical in language development, surprising given the fact that mothers traditionally spend the most time with kids.

Speculation as to the basis for this discovery is that fathers bring a broader vocabulary and don’t ‘talk down’ to their children. While mothers tend to speak on a level children are more comfortable with, this balance is necessary for developing a child’s communication skills. (SOURCE)

Having an active father makes the transition to school, and later a full-time career, easier on children. However, this could be attributed to the fact that we still live in a largely male-dominated society. Where interacting and communicating with men in superior positions in some cases, like that of a father is crucial to success.  (SOURCE)

Here is a reasonably interesting one. Testicular size may be a predictor of father’s involvement. The larger the testicle, the less involved. (SOURCE)

Children raised with a father had, on average, higher IQ. (SOURCE)

#7 Girls Go Into Puberty Earlier Without An Active Father

On average girls without active fathers go into puberty faster. And this has largely been attributed to both a psychological and physical barrier that is broken much sooner in girls without active fathers. Think about it, in many cases, a biological parent of the opposite sex is a deterrent for children to think about, and allow themselves to develop sexual tendencies. Complications arise even more in situations where a stepdad is present.  (SOURCE)

#8 Risky Behavior Is More Likely In Kids Without Active Fathers

Teens in single-mother households are 30 percent more likely than teens in coupled families to engage in risky behavior like drinking, drugs, delinquency, and dropping out of school.  (Source)

These points should not be taken to mean that children raised by a single mother cannot be successful. Paul Raeburn himself notes that there are countless examples of fortunate men and women who grew up in a single-mother household. However, the science should not be ignored, and some of the details are worthy of complex discussion.