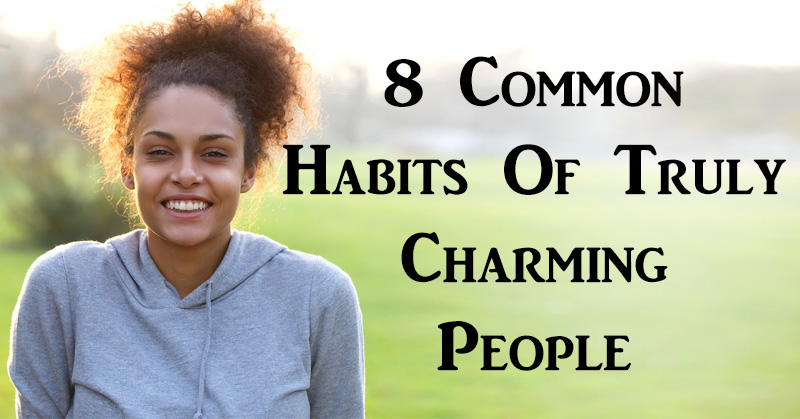 Have you ever met someone who is truly charming? If you have, you’ll know it. Charming people seem to radiate confidence and enthusiasm. They’re likable, they have a sense of humor and it’s impossible not to enjoy their company. If you’ve ever wondered what makes a person so captivating and charming, this is your chance to find out.

1. They Use The Power Of Touch

Touching can be a powerful tool when it comes to understanding others. Charming people aren’t afraid to shake someone’s hand when they meet them. They don’t feel awkward about hugging a friend or giving a co-worker a pat on the back to congratulate them. These subtle motions help prove the sincerity of their words and gain the trust of those around them.

2. They Show That They’re Listening

A charming person knows how important eye contact is during a conversation. They smile when you smile, they nod when you nod. They make sure to remain focused on what you’re saying and listen carefully. Paying attention to your words and emotions allows them to have a sincere and honest conversation.

Have you ever ran into someone you only met once very briefly, and they remembered your name? It made you feel good, right? Charismatic people pay attention to names and other important details. They make a point to remember them, which always makes others feel great!

4. They Aren’t Afraid To Look Silly

Part of having a charming personality is being comfortable in your own skin. Charming people aren’t afraid to be awkward, which only makes them more endearing to others. Being able to laugh at yourself shows that you are genuine, honest and comfortable with who you are. These qualities often gain a person the respect of those around them.

5. They Aren’t Afraid To Lose

Charming people usually aren’t too competitive. They don’t try to win at everything. Instead, they aim to give more instead of take. They don’t find it difficult to admit their mistakes, failures or weaknesses. They are open and honest because they know people appreciate real emotions.

By the end of a conversation with a charming person, you might realize the topic was you the entire time. Charming people enjoy asking questions and getting to know others. They can talk about themselves openly, but they genuinely want to know what you’re thinking, which makes them trustworthy.

Some people purposefully incite disagreements. Charming people on the other hand, always seek common ground with others. They aren’t interested in proving a point or shoving their opinion down anyone’s throat. When they’re in a room with other people, they look for a common interest to get a conversation started.

Truly likable people express their emotions incredibly well. They have the ability to turn even the most boring story into an entertaining, humorous event. They use facial expressions and gestures to express the mood of their story which helps to captivate others.