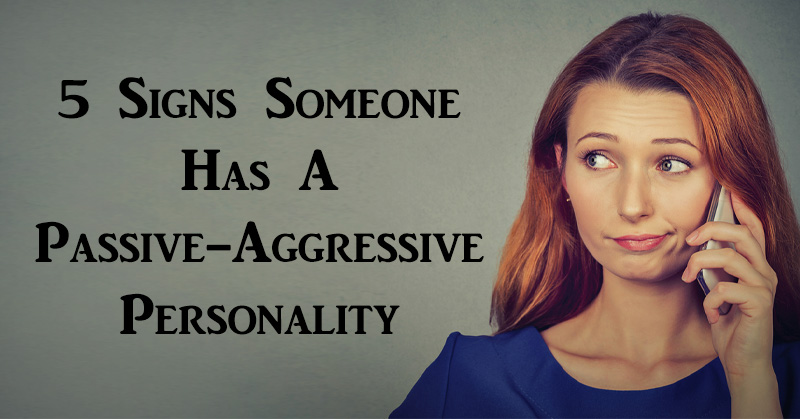 5 Signs Someone Has A Passive-Aggressive Personality

People with passive-aggressive behavior express their negativity through their actions, which creates a separation between what they say and what they do. Instead of voicing their opinion about a situation, they say they agree but then they’ll act the opposite. People who are passive aggressive are often bitter, aggressive and difficult to deal with. They’re also tricky to identify, because their words say one thing, while their actions say another. Learning to identify passive-aggressive behavior can help you avoid a toxic person.

Here are five signs of a passive-aggressive personality:

If a passive-aggressive person is angry at a friend, family member or co-worker, they’ll get their revenge by excluding them. Instead of confronting the problem, they take action. They might invite everyone to dinner except for the person they’re angry at. Or, they might send out an important e-mail at work but “accidentally” leave someone’s name off of it. A passive-aggressor creates a toxic environment when they’re unhappy.

2. They Do Small Things To Gain The Upper Hand

A passive-aggressive person always wants the upper hand. They might arrive late on purpose, because they know you’ll wait for them. Or they’ll leave their shoes on in the house when they know you like people to take them off at the door. They do small things on purpose to show that they are in control, and they enjoy pushing buttons.

A person who is passive-aggressive won’t admit when they’ve been hurt. They rarely vent about a bad day or complain when someone wrongs them. Instead, they say they are fine, then they’ll plan a way to hurt the person who they are upset with. A passive-aggressive person doesn’t know how to deal with their feelings in a healthy way. They choose to hide their emotions from others while allowing anger to build up inside.

People with a passive-aggressive personality are almost impossible to reason with. They refuse to engage in open confrontation. When you sense that something is wrong and ask them about it, they’ll deny that there is a problem. When you try to have an honest conversation with them about their thoughts and opinions, they’ll simply agree with everything you say and refuse to share honestly. Passive-aggressive personality makes someone extremely difficult to have a relationship with.

5. Their Kindness Comes With An Edge

A passive-aggressive person will never give you genuine praise for an accomplishment. Instead, they’ll use your accomplishments to make themselves look better. They might say something like, “You look great in that dress! I would buy one but I think I’m too thin to pull it off.” They are pros at backhanded compliments. Their passive-aggressive behavior makes it impossible for them to be happy when others succeed.