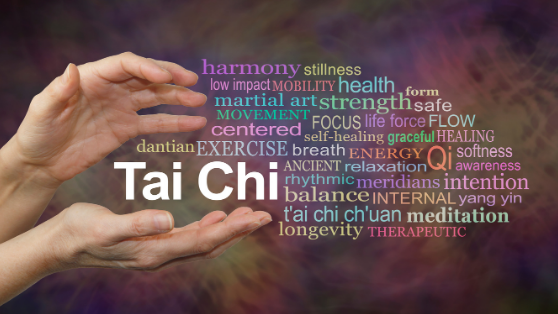 As legend tells it, an old monk sat quietly meditating on a mountainside when a snake and a crane began to fight. As he watched, he noticed the interplay of the animals – one attacking, one defending – playing out the natural balance of yin and yang. He sought to learn the movements of animals and wove them into a tapestry of energetic play. Thus, Tai Chi was born!

There’s a bit of embellishment there, but that’s the beauty of legends. While the true origins may be more mundane (or fantastic!), the resulting combination of forms became known as Tai Chi, or Grand Ultimate (more accurately pronounced taiji).

What Is Tai Chi?

Now, if you’re looking for a technical history of Taijiquan and Chinese wushu, this isn’t it. Instead, it’s a Westerners view of the beauty of flowing movement and meditation in motion.

Tai Chi is not just the blending of movements but also of philosophies of ancient China. Drawing on the cultures of Taoism, Buddhism, and Confucianism, this moving art form takes the best of each to develop its philosophy of Harmony. But if it’s simply Harmony, then what are we doing when we “play” Tai Chi?

That flowing movement you see in the parks or in the movies is called Tai Chi Ch’uan (or taijiquan).  When we “do” baseball or basketball or football, we play that sport. Essentially, participants who play Tai Chi are practicing martial arts.  This martial art, however, is considered an internal martial art. David-Dorian Ross, Taiji Master and creator of the TaijiFit Method, says it best:

TaijiFit, also called Tai Chi Flow, is the practice or exercise of harmony. So when we play Tai Chi, especially using the TaijiFit Method, we are doing our “harmony exercise.”

The best part about this method of learning Tai Chi is that there is nothing to “get right” – no form to memorize, no exact way to do the movement.

When I first learned this martial art form, my Grand Master would put my hands in the correct position if I didn’t get it right myself. Then I’d practice that one posture / form for a week or two before moving on to the next one. It took three years for me to learn two Taiji Forms in this way (the Simplified 24 Forms and the Long Chen Form).

So not only is traditional taiji a slow movement, but it’s also a slow process!

As is true of just about every cultural tradition, Tai Chi has changed when exported to other countries. In the Greater Washington, DC, area, for example, we can find traditional Chinese Taiji, as well as versions that hail from South Korea and Vietnam.  I learned a Japanese Tai Chi Form that is particularly calming and meditative. Tai Chi can also be blended with other meditative traditions, such as yoga, or more energetic movements, such as HIIT.

But why? What is it about this moving meditation that speaks to many cultures and many practices?

Well, for one thing, it truly is a healing art.

A quick search in PubMed.gov (the National Library of Medicine online repository of scientific research) returns over 66,000 studies and discussions on Tai Chi and health.  My focus has been fall prevention and brain health.  According to a recent article in The Harvard Gazette, the physical benefits include fall prevention, as well as pain management, improved cognition, and reduced stress: (2)

“While Tai chi may offer senior practitioners inner peace, scientists also value it for its fundamental, physical benefits. In addition to improving balance, flexibility, and mental agility, it also reduces falls, the largest preventable cause of death and injury among older adults.” 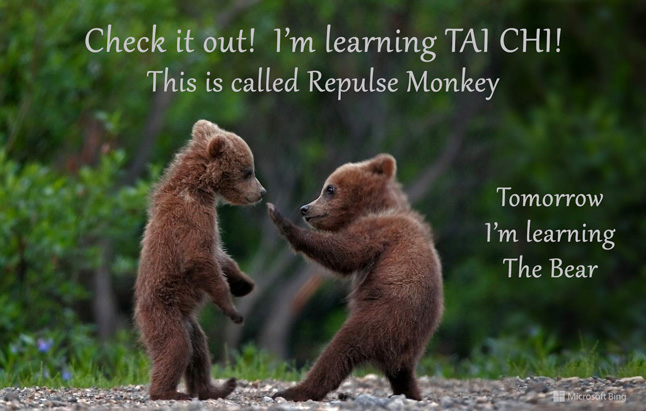 And who can resist movements like these? Bamboo on the Mountain, Parting Wild Horse’s Mane, White Crane Spreads Its Wings. Yes, even Repulse Monkey! You can experience these and many others with this amazing flowing exercise.

Check Out This Sample Flow

As a martial art, taiji strikes a balance between form and function. As a meditative movement for the aging brain, taiji promotes calm and challenges the mind and body together. It’s a full mind-body exercise that will help bring you into balance.

Taiji and any mind-body exercise is a personal choice. Some people prefer rebounding; others enjoy yoga. Whatever movement appeals to you, practice something every day.