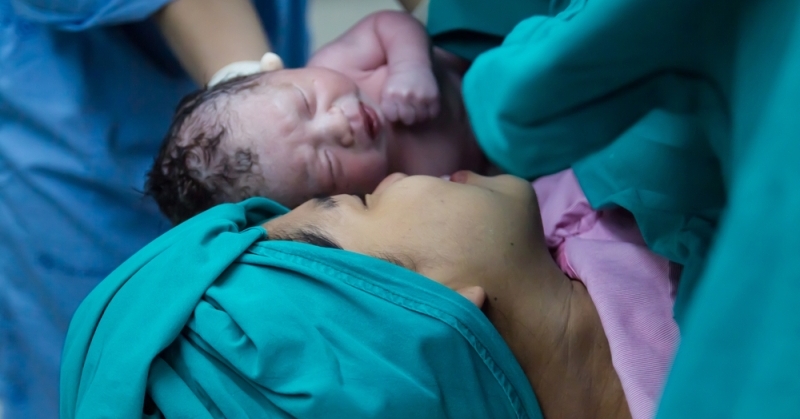 You might wonder why a 40-year-old nutritionist without kids is writing a piece on unplanned Cesareans. Though I have no personal experience with childbirth, I do have lots of experience with birthing aftermath. I see so many suffering from autoimmune diseases in my practice that it seems like this autoimmune epidemic could instead be the actual apocalypse and not a pack of flesh-eating zombies. Suffice it to say some of us are actually being “chomped on” from the inside out due to the massive amount of gram-negative bacteria, viruses and protozoa entering into our systems by way of a “leaky” gut. But we’ll save that for another blog…

Entering the world through our mama’s birth canal seems like such a basic necessity to starting life (not unlike breathing) that it would never be intentionally passed up, right?

Sadly, entering this world through a perfectly procured microbial vaginal slip and slide (what gives us a fighting chance of avoiding the autoimmunity bullet) has been lost to convenience. In fact, according to the CDC stats there were 1,284,551 Cesarean births in the United States in 2014 alone. That’s over a million babies that came into the world without getting coated by their mother’s healthy bacteria they need to flourish. It’s like most humans don’t stand a chance from the get-go.

Science has proven that specific microbes start to colonize in a woman’s vagina during pregnancy. And what makes this so fascinating is that the adult microbiome (the bacterial environment that covers our skin and mucus membranes) varies greatly — however, women’s microbial communities all move into the same state during pregnancy!

Not only does a mama’s microbial community shift within the obvious baby-makin’ region, the gut biome also morphs toward a higher population of microbes that can efficiently extract more energy and nutrients from food to pass along to the fetus. 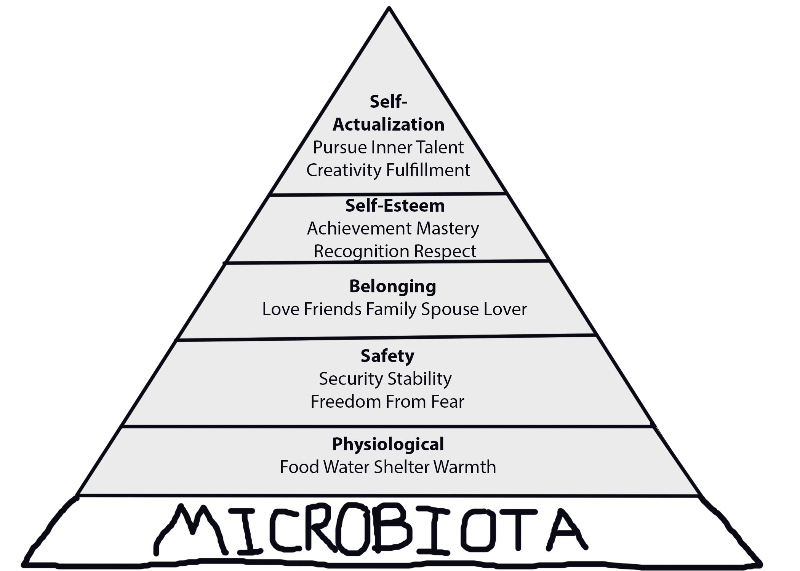 Most importantly, there’s research suggesting this change is the biome preparing it’s perfect microbial “blend” that’s to be passed along to the babe during a healthy vaginal delivery. That trek down the birthing canal is when the newborn is coated with it’s own “protective layer” against the world. And we all know how toxic the world has become.

The current fetus microbial model leads us to believe there are no bacteria present in the fetus (though they are surrounded by microbiota in the womb) and it’s not until childbirth that the first microbes are transferred to the baby through the birth canal during delivery. So according to what we know as of today, if that baby doesn’t come out of that birth canal, the baby does not get inoculated with healthy probiotic bacteria.

How do we know this?

Through the work of microbiologist and Associate Professor at the Department of Medicine at New York University, Maria G Dominguez-Bello.

That’s crazy! Think about the implications here. These newborns are literally missing an entire community of microbes our bodies are adapted to and are needed to thrive when we are born.

No wonder Cesarean births are linked to a whole host of immune and metabolic diseases such as asthma, food allergies, Celiac disease and obesity (to name a few).

Not allowing your babe this natural birthright is setting your child up for a life of chronic illness before they even take their first breath. 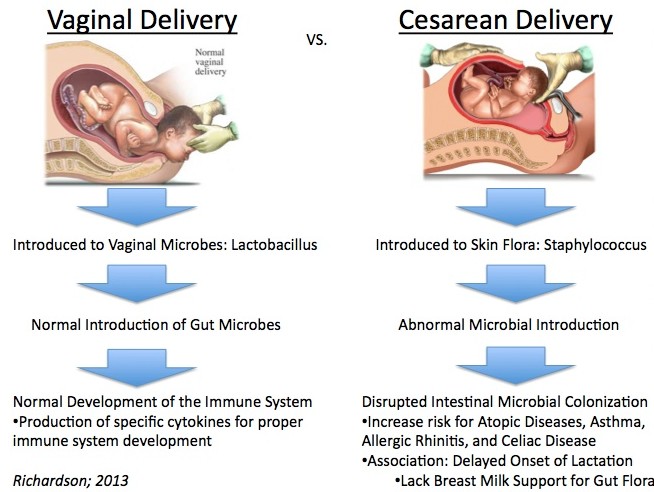 The information I am about to give you (below) is not intended as a “quick fix” for those who have scheduled a C-section out of convenience, but rather for those courageous parents who had to give up their hopes of a vaginal birth in order to save a life.

It’s an easy DIY technique that doesn’t need any modern medical technology. You are simply going to inoculate your baby yourself, if your babe wasn’t able to get “the goods” via mama’s vagina.

Of course Rob Knight, world leader in the study of the microbiome, professor at UCSD School of Medicine and the co-founder of the American Gut Project knew to do this to his own baby when he and his partner were forced to have an unplanned Cesarean!

Knight may have actually been the pioneer of DIY newborn inoculating. Because of his field of study he knew how dire it was for his baby to have exposure to his wife’s vaginal biome. At the time he did this, there was no clinical protocol or even any research on the outcome of a Cesarean-born infant that had been basically rubbed down in their moms vaginal fluid post birth. But his instincts led by his years of biome research, proved to be correct.

As of last month, a study dropped, spearheaded by both Knight and Dominguez-Bello proving that if a Cesarean-delivered newborn was swabbed with the mothers vaginal fluid, their gut, oral and skin bacterial communities were enriched with vaginal biome!

So for all you parents out there who have the best intentions of delivering vaginally, but your life or the life of your unborn baby, or both, are at risk, there is a simple solution that is now officially backed by the science method. 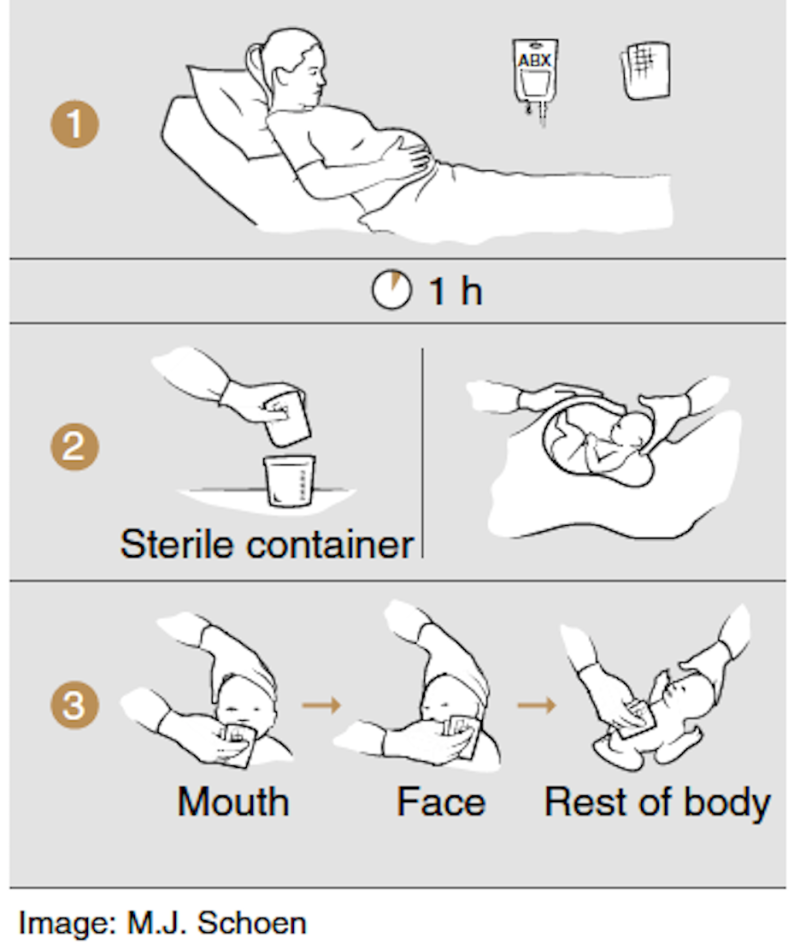 The current and only study done to date on this procedure recommends the following:

1. The mom should test negative for group B Streptococcus (GBS)
2. Have a vagina free and clear of vaginosis
3. Have a vaginal pH < 4.5 hours preceding the C-section

However, I would think twice about not swabbing your baby even with a positive Group B Strep infection. Why? Complications from GBS-positive mamas only occur in approximately .0225% of infants. And according to one study conducted at the Southern California Kaiser Permanente Hospitals from 1988 through 1996, the preventative treatment recommended to keep your baby safe with the use of IV antibiotics during labor “did not change the clinical spectrum of disease or the onset of clinical signs of infection within 24 hours of birth for term infants with EOGBS infection.” Conclusion: The risk of your baby not getting your vaginal biome far outweighs the risk from GBS infection, especially when the clinical preventative treatment does not work.

First, because it is medical procedure to take IV administered antibiotics an hour before a scheduled C-section and also during labor if you test positive for GBS (and we know antibiotics alter the biome), and if it’s looking like an unplanned Cesarean is becoming a probability, I would air on the side of caution and get your sterile gauze soaking up that thriving vaginal baby-biome at least 30 minutes before they administer the antibiotics, though 60 minutes is preferred, but for those reading this, I am hoping this is being used for all the unplanned Cesarean’s and in these situations there’s usually no time for a 60-minute soak.

If you are an at-home birther and things start to get funky and the decision is made to quickly get to the hospital, get your sterile gauze ready using your sterile gloves and gently insert into your vaginal canal. You’ll then remove once you are lying down in a hospital bed. Be sure to use clean, sterile hands and/or sterile gloves upon removal. Place into the sterile cup, seal and wait for the baby to come via Cesarean before removing.

In a perfect world, you would take the vagina’s pH, wet the gauze with sterile saline solution, then gently place the gauze into the vaginal canal 60 minutes prior to the antibiotic (which you can refuse, but it’s usually a fight. Just remember, you can say “no” to anything they “require”) administered before the Cesarean.

1. Take 8 cm × 8 cm four-layered gauze and fold it like a fan, then in half
2. Wet with sterile saline solution
3. Insert into vagina directly after saline

You’ve got your sterile, soaked gauze and your baby is out and ready! If you were able to get a good soak with that gauze, start swabbing within 1-3 minutes of the baby’s delivery. If you didn’t get to do things in an orderly way, just be sure to get some vaginal fluid onto the gauze and get it onto the baby within 5 minutes after delivery, at the most.

Standard procedure is typically to bring the baby directly from removal to the neonate lamp. Within 1 minute of delivery, you should start vaginal biome application. This should not take more than 20 seconds. Once it is finished, the neonatologist can proceed with his standard newborn exam.

Here’s how to swab:

Please check with your doctor before administering this procedure. Andrea McNinch is not a medical doctor nor claims to be, and you as the reader are agreeing that you are solely responsible for the use, misuse or nonuse of the presented information. 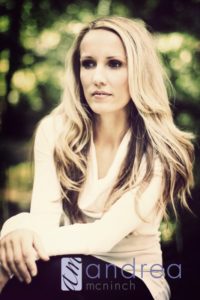 Andrea McNinch is a nutritionist specializing in gut health that operates under the simple premise that better health isn’t a science problem, but an information problem. What truly sets her apart from the rest of the pack, besides her mainstream approach to nutrition, is her education, which is both vast and deep.

Through her own struggle with illness, McNinch was led to pursue master’s level nutrition training from Dr. Cousens’ world-renowned School of Holistic Wellness program, followed by another Master’s in Metabolic Nutritional Medicine at University of South Florida’s Morsani College of Medicine.

To learn more about Andrea and get life-changing tips and tricks of the nutritional trade, go to her website and click her social icons.